Many years ago, I tried to read the first The Wheel of Time instalment. It had been recommended to me by a friend, and I’ll be honest here — I found The Eye of the World to be a painfully dull read. It was slow, and I didn’t connect with any of the characters. I forced myself to the halfway point and then gave up.

From here be spoilers!

When Amazon announced their TV adaption, I wasn’t particularly excited. However, my wife and I watched the first episode on a whim, and we were both pleasantly surprised. The costume design and set design both looked great. There was plenty of action, and Rosamund Pike ruled the screen as the powerful Aes Sedai character Moiraine Damodred. Daniel Henney also stood out, playing the laconic Lan Mandragoran.

The rest of the cast was… okay. Perrin and Rand came across as a little dull, and Nynaeve a little annoying. The best of the rest was Barney Harris as Mat Cauthon — and if you’ve watched the show, you’ve probably realised that he quit partway through the production. Thus, Mat Cauthon was temporarily written out of season 1, so it could be recast.

Online, I came across plenty of people moaning and groaning about the show being too woke.

WOKE: is aware of and actively attentive to important facts and issues (especially issues of racial and social justice).

Yes, many of the cast aren’t white. But seriously, the show was a lot less woke than people online would have you believe. The powerful Aes Sedai are all women, just as they were in the books. Some of the characters probably weren’t black or brown in the books — but it’s 2022. Who cares if they cast an actor that looks slightly different from the book’s descriptions — it’s not a lookalike contest.

Some critics labelled it “The Woke of Time”, including renowned author Neal Asher.

Yikes. Who knew Neal was a middle-aged white guy who likes to complain about there not being enough white people on the small screen?

Anyway, I hadn’t intended this review to focus too much on the wokiness, other than to say it wasn’t as crazily over-the-top woke as I expected. So yeah, that aspect didn’t spoil anything for me.

The show continued for a decent 5-6 episodes. It was action-packed, perhaps going a little too fast sometimes. Some episodes felt like they’d been rushed out the door — particularly the special effects behind The White Tower, which looked like they’d been built using a computer game graphics engine from 2007. I can imagine Jeff Bezos breathing down the VFX team’s neck: Faster! Cheaper! Outsource this to a third world country already!

I recall from the first book (which I half read) that there is no question around who the chosen one is. It’s Rand, right from the start. They tried to up the suspense by keeping it a secret in the show. Is the chosen one Rand, Mat, Nyneave, Egwene or Perrin? 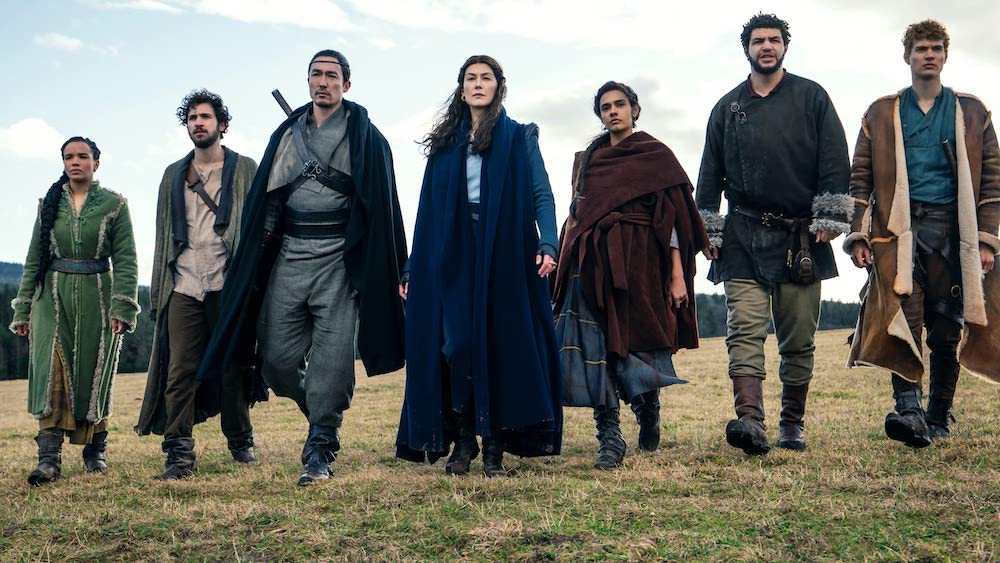 Things start to unravel in the last couple of episodes. When they reveal the chosen one, Rand hears the whispers of the wind say to him: “It’s you! Mwa ha ha!!” And suddenly, he knows what he’s always known… or something like that. Meanwhile, a bunch of channelers unleash a massive lightning bolt that takes out an entire army, basically meaning any random bunch of Aes Sedai could be the most powerfully destructive force on the land. So who cares if the trollocs are coming?

Rand and Moraine travel through the Blight, and there they meet the big bad, who tempts Rand into constructing a fake but perfect life for himself. Of course, he rejects it, as the bad guy is bested. But it turns out the big bad is not the big bad — queue season 2.

A little bit like Star Trek: Picard, The Wheel of Time has an very good set-up, only to be let down by the last couple of episodes. When you construct story promises and build towards them, you also need to understand how you will deliver on those promises. I spent much of the show on the fence, not sure if I liked it or not. By the end, it simply felt unsatisfying.

Will I watch season 2? Probably.