Confused about all the Star Trek books? Confused by all the terms: Relaunch, litverse, post-Nemesis continuity? Not sure where and how to start with Treklit? This article is a simple explainer.

There are a lot of Trek books. And I mean, a lot. For many years, Trek novels were simply original works of fiction, based on the show (TOS, TNG etc). They were self-contained books, and set during the TV series. Sometimes they’d even say: “The following story takes place shortly after episode X”. CBS marketing, or whoever owned Star Trek at the time, signed off on each book to ensure the books wouldn’t contradict the show; past, present or future.

But, by the mid-2000s, the Star Trek franchise was dead in the water. Star Trek: Nemesis had bombed at the cinema. They cancelled Star Trek: Enterprise after just 4 seasons. Deep Space 9 and Voyager had finished up their run, and no further sequels, movies or spinoffs were planned. 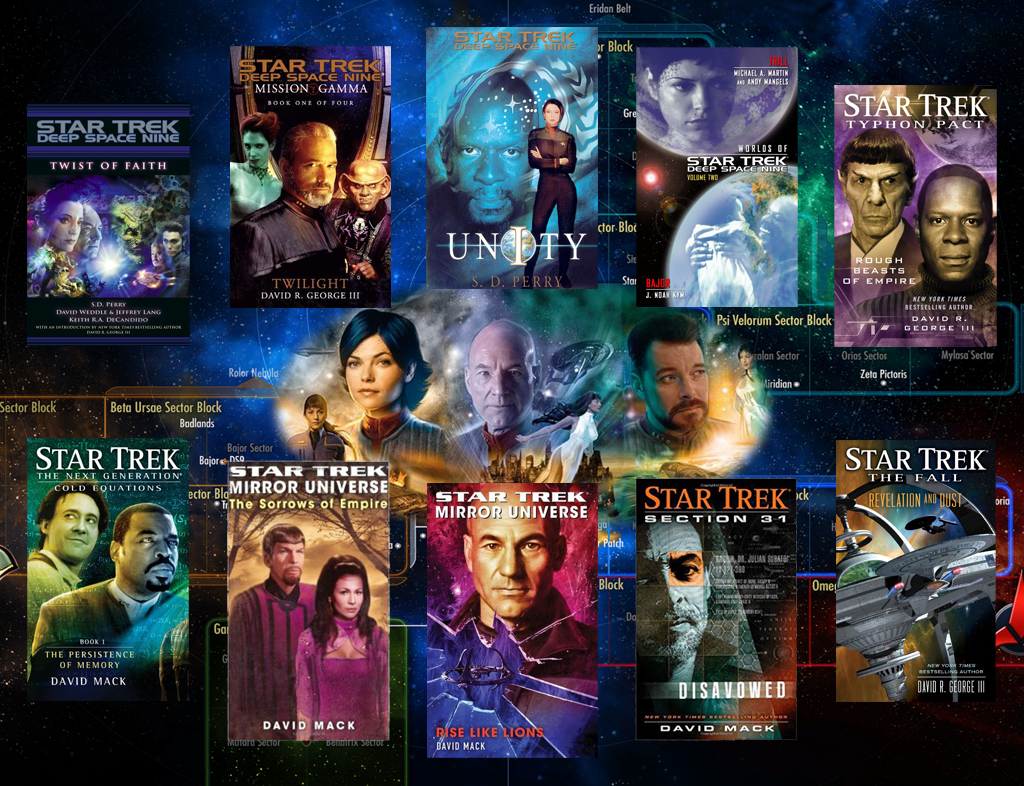 At this time, CBS marketing (or whoever) loosened their guidelines around Trek books. For the first time, the books could now continue the events of the TV series after its last episode or movie. E.g. If you have ever wanted to know what happened after Voyager made it back to earth, you can read: Star Trek: Voyager: Homecoming. The book is set immediately after the series finale, Endgame, and continues the story. The next book continued on from that book, and so on.

Things get a bit more complicated, though. In 2005, it was time for Star Trek: The Next Generation to get to the relaunch treatment. The first TNG relaunch title was Death in Winter, published in 2005. However, in the same year, they also published Star Trek: Titan: Taking Wing, which was a TNG spinoff, in which Riker is now a captain on the USS Titan (referenced in the movie Nemesis), alongside Troi and Tuvok.

Both book series would run in parallel, existing in a shared universe. Voyager and Deep Space 9 were still continuing their “relaunch” stories independently. But, of course, all three series were chronologically taking place simultaneously, in the same universe.

Eventually, Voyager and Deep Space 9’s relaunch books were “merged” into the shared universe set up by TNG and Titan. There were additional spin-offs and crossovers that were set in this “litverse” or “post-Nemesis shared continuity”. These include one-shot books such as Star Trek: Articles of the Federation and Star Trek: A Singular Destiny. Also, Star Trek: Department of Temporal Investigations and Star Trek: Section 31.

Confused yet? The hardest part is finding out some kind of logical order in which to read them. Luckily, there are two outstanding resources online.

However, as I’ve read along with a dozen books, it’s become obvious that there is no exact order in which we must read them. Many books run roughly parallel to each other and have fairly independent stories. If you prefer to pick and choose a bit, while following a sensible reading order, I recommend: https://www.shastrix.com/books/star-trek-reading-order.php

Of course, this line of books does not nicely match up to the new Star Trek: Picard. So if you read these books, understand that they are one possible timeline of events. That being said, the last three books in the series, a trilogy named Coda, may tie up the loose ends somehow.

The last thing I will say is kudos to the Star Trek publishers Simon & Schuster / Pocket Books for giving the writers a chance to wrap up the post-Nemesis relaunch/litverse book series. Star Wars tie-in lit was in a similar position, and Disney just cut the book series, without a satisfying resolution, once the new movies came out. So good on them for giving readers a proper ending!