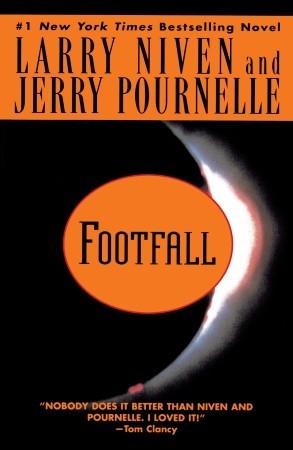 Written in 1985, Footfall is an epic story of alien invasion. Niven & Pournelle write big books; the kind of books that would make an effective doorstop for even the heaviest of doors in the windiest of cities. Footfall, featuring dozens of characters and multiple, interweaving storylines, feels a lot like an epic movie. It’s hard not to compare it to the Roland Emerich school of storytelling; Indendepence Day in particular feels heavily influenced by Footfall.

Perhaps the weirdest aspect of the book is that the aliens themselves are a sentient herd of small elephants. In that, their society has evolved around the idea of a herd, and herd mentality. As they begin their conquering campaign of Earth, the aliens struggle to understand humanity’s individualism. When a single human person acts out, contradicting the status quo, they declare them “insane.”

Speaking of insane; there is an insanely huge number of characters in the book. I’d guess at least a hundred named characters. My copy of the book had a list of the characters at the start, no doubt to help alleviate reader confusion. The list was so long I often had trouble finding a name on there.

A common criticism of Footfall is that we are introduced to many characters at the beginning of the novel that, by the end, have no real concrete impact on the story. Certain characters get some heavy coverage early on, and then fade out three-quarters in.

Some of the characters, particularly the female characters, feel woefully out of touch with today’s ideals. The book feels very 80s in the way it handles relationships. It seems everyone is sleeping with everyone else; again, some of these details have no impact on the overall story.

The main characters eventually take control of the narrative. There is Hairy Red, a down-on-his-luck biker and acoustic guitar enthusiast. David Coffey, the American president who doesn’t always make a convincing commander in chief. Jenny Crichton, an army captain who stumbles upon the discovery of the alien ship. Jack Clybourne, the presidential bodyguard and Jenny’s love interest… hey, you know what? There are too many characters in this book to list even the main ones.

Footfall has a long first act. The first act is probably the size of a small novel. As the aliens approach, a small ship is sent out to meet the approaching ship. Lots of stuff happens on Earth. Space nut Wes Dawson maneuvers his way onto the ship as Earth’s resident American politician.

There were a glut of disaster and alien invasion movies in the 90s and 2000s (Independence Day, 2012, The Day After Tomorrow, and so on), all of which seem to draw influence from Footfall. The book switches perspectives often, using a large cast of characters to show the huge event from several different perspectives.

Reading the book, I mentally cast American president David Coffey as Bill Pullman. However, unlike President Thomas J. Whitmore, Coffey is less sure of himself and fails to deliver any memorable speeches. 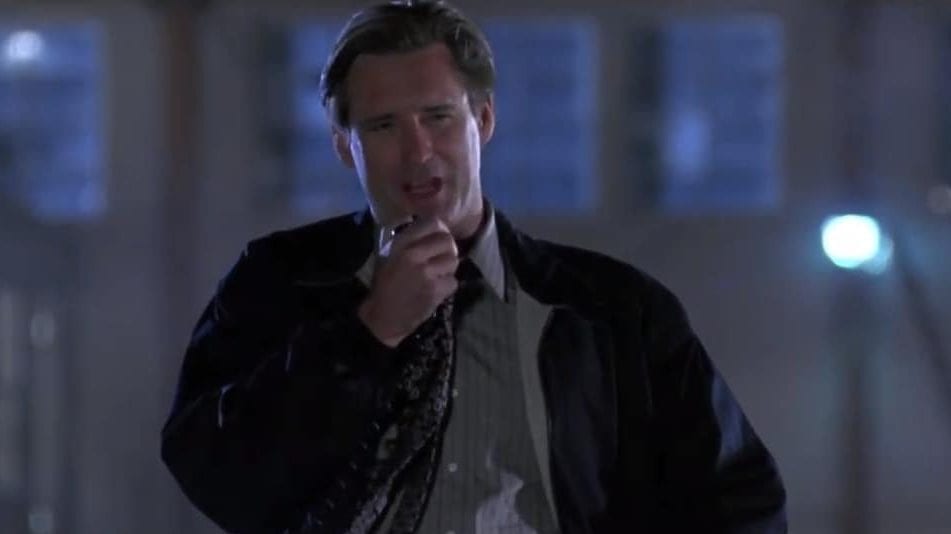 Normally, I don’t particularly like books that change perspectives regularly, preferring a narrative anchored to a single character. However, Footfall showed me just how effective a large cast can be. Perhaps, because each of the cast of characters is securely tied to the overall plot of imminent invasion, they each, in their way keep the main story chugging along.

People will criticise the book for being a bit behind the times. Pournelle is well-known to have conservative political opinions, some of which seep into the book. It’s not an optimistic Star Trek type story. Nor is it especially dark or grim. The tone works well because it strikes a good balance, even if some of the interpersonal aspects feel a bit 80s.

Speaking of the 80s… probably my least favourite part of the book was the scenes involving the political machinations of the Soviet Union. Perhaps in a different time, this would have been more appealing. But mostly it feels like a diversion from the main story.

The aliens themselves are fascinating, and the book focuses on them and their complex culture more than I expected. They are not the featureless black evil beasts from Alien or Independence Day. Instead, the Fithp are a herd of sentient baby elephants armed with a technology they barely understand.

My biggest issue with the alien characters was that it was difficult to keep track of which character was which. With so many different fithp interacting on the ship, mostly without any distinct characteristics, it got a bit confusing. I think the book should have focused on one central alien character. This might have helped them feel more grounded.

A few minor quibbles aside, Footfall was just so much fun to read

That being said, the alien that surrenders to the Earthlings and helps Coffey and his team of sci-fi writer advisors was a masterstroke and provided many funny scenes. Who wouldn’t giggle at the idea of the American president climbing into a warm mudbath to get some information from a sympathetic alien baby elephant?

A few minor quibbles aside, Footfall was just so much fun to read. It made me realise alien invasion stories such as these are surprisingly rare in book form. I cannot think of another similar example. At times it feels like a Michael Crichton or Stephen King book. However, I liked it more than both Jurassic Park or The Stand, for example.

Footfall has turned me into a huge Pournelle and Niven fan. I’ve already since read The Mote In God’s Eye and soon I will also read Lucifer’s Hammer. It’s truly epic, massive sci-fi. I only wish it was easy to find books this good more often.