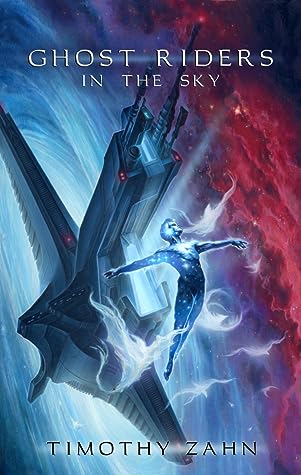 In 2020, veteran sci-fi author Timothy Zahn dipped his toes into self-publishing for the first time, releasing the original novella Ghost Riders In The Sky. Zahn is the author of the Quadrail books, the three Cobra trilogies and more recently the Sybils War trilogy. However, he is perhaps best known for his Star Wars tie-in novel series Heir To The Empire.

Ghost Riders In The Sky focuses on the character of Skoda, a misanthropic, down-and-out ’navigator’. He likes a drink (or three), and doesn’t think too highly of people; be they human or Meerian.

The Meerians control space travel, using humans to navigate their ships by having them sit in a Sue Ann Chair and project themselves out beyond the starship’s bow using a kind of astral projection. This takes a heavy toll on the poor human navigators, who must endure a 10-year indenture if they’re silly enough to sign up for flight school.

Skoda is approached by a group of humans intent on breaking the Meerian’s monopoly on space flight. However, their actions catch the attention of those who have an interest in maintaining the status quo. Meanwhile, the mysterious stargulls start showing up every time Skoda takes a trip into space, and before long he learns the secret behind their existence.

I immediately liked Skoda, the book’s protagonist. He’s grouchy, misanthropic, and burnt out from his many years as an indentured navigator. When he is approached by Chandra and co, he’s instantly suspicious and standoffish, in the classic style of the reluctant hero. But he’s fed up with Merrian control, so he realises there is value in their risky proposal.

Zahn's writing style is, as always, punchy and concise. He doesn't spend much time building up backstories or describing things in great detail.

If you have read Zahn’s Quadrail books, you might have noticed similarities between Skoda and the hero of the Quadrail novels, Frank Compton. They’re both guys who are a bit down on their luck, not particularly heroic, and generally fly by the seat of their pants.

Zahn’s writing style is, as always, punchy and concise. He doesn’t spend much time building up backstories or describing things in great detail. Zahn focuses on a fast-paced plot, with plenty of action and a bit of mystery. When reading Ghost Riders I envisioned a Blade Runner-esque world; dirty cities filled with huge technicolour advertisements, plumes of bilious smoke choking the air, and the soft hiss of acid rain burning the steaming streets. Of course, Zahn describes nothing in this way. But for me, the book gave off a cyberpunk vibe.

As the story progresses, it focuses more on the mysterious stargulls. As it turns out, they are the male ghosts of another race who had once acted as navigators. However, they had rebelled against the Merrian’s and wound up perpetually stuck on the astral plane while their females were locked up in status capsules.

Nothing about Ghost Riders In The Sky is particularly groundbreaking or inventive. But it’s a solid and enjoyable story, which I devoured in just a few sittings. We get a fascinating glimpse into a futuristic world; a world Zahn could potentially explore again. I also liked the cover art, which skillfully illustrated a navigator projected out in front of a starship.