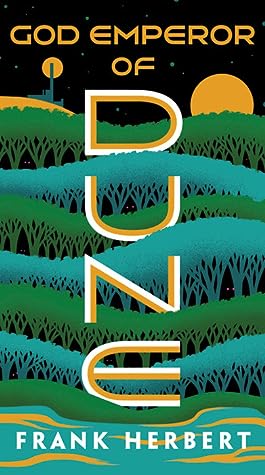 In an excellent review of God Emperor of Dune, found on Tor.com, author Jo Walton is quoted as saying: “[…] each of Frank Herbert’s Dune novels is about half as good as the one before it.”

It’s a reasonable position to take. The original Dune novel was rich, layered and epic: love, lust, betrayal, murder, politics, backstabbing, and that spicy cinnamon-scented melange. It managed to straddle the line between genre fiction and literary fiction, satisfying both sides of its split personality.

Evidence suggests that Frank Herbert was never interested in writing the Dune sequels. However, from the second book (Dune Messiah) onwards, Herbert pivots to a different kind of storytelling. The Dune sequels are a slow-burn — drawn out and philosophical. Perhaps feeling pressure from his publishers to write more sandy, spice-fueled adventures, Herbert seemed to bury a sense of quiet resentment between the lines.

After finishing the previous entry, Children of Dune, it took me a good while to work up some courage and crack open the covers of this one… But then I started reading, and I was floored by the power and excitement of the opening scene. God Emperor of Dune begins with a beautifully crafted action piece. Siona and her rebellious friends are running away from Leto’s Citadel, chased by a pack of bloodthirsty d-wolves. Based on the book’s opening, I was cautiously optimistic it might get less bogged down in pseudo-philosophical ramblings than its predecessor.

Boy, was I wrong.

The book promises a rebellion led by Siona against the 3000-year despotic rule of Leto II. But we quickly leave her behind, and instead, we’re subjected to countless “room scenes” featuring the dull-as-dishwater character Moneo. What are “room scenes,” you ask? I think of them as scenes not rooted in action. Typically they go like this: Moneo walks into a room. He has a somewhat confusing and long-winded conversation with Leto. Moneo leaves the room. Rinse and repeat.

“Room scenes” are the scourge of dull sci-fi stories. The Star Wars prequels were criticised for too many “room scenes”. The Honest Trailer of Star Wars: Episode II - Attack of the Clones sums it up nicely:

The book is crammed with long, talky scenes overflowing with pseudo-philosophical dialogue that barely advances the plot. However, the appearance of Duncan (in ghola form, of course) does introduce some tension as he steadfastly refuses to bend the knee and acknowledge Leto as the god-emperor supreme.

And yet, despite its shortcomings, I found myself having a pretty fun time reading it. There are some positives. For starters, the story is a lot less confusing than Children of Dune. And when the action does pick up, such as the scene in which Duncan climbs the great wall to take a shot at Leto before his wedding, it is genuinely exhilarating.

And yet, despite its shortcomings, I found myself having a pretty fun time reading it.

God Emperor of Dune could have been a lot more interesting if we’d stayed, at least in part, with Siona and her band of rebels. It’s a shame the book focuses almost solely on Leto, with a supporting cast of Duncan, Moneo and Hwi. The book teases with entertainment and then bludgeons the reader with tedium.

To further demonstrate my point: there is a great scene where Malky is brought in. The old, curmudgeonly Ixian ambassador doesn’t hesitate to give Leto a piece of his mind. He’s a great character, unafraid to tell it like it is. But of course, he only lasts one scene before he’s nixed. That’s how it goes with the Dune sequels; a brief flash of joy snuffed out before it has time to shine.

It’s also evident that the Dune books will never build out the broader Dune fictional universe. Herbert’s world-building is unparalleled, but we never get to experience that world. Instead, we remain stuck on Arrakis. We never get to visit Ix, Caladan or Tleilax. We never spend any meaningful time with members of the Guild as they traverse space or the Bene Gesserit as they do their thing. Instead, it’s always an Atreides, always on Arrakis, always talking and rarely doing anything.

God Emperor of Dune is an average book, which leverages the power of the original Dune to keep the reader interested. As a result, it’s a difficult book to rate. As I turned the pages, I thought about what rating I might give it. I fluctuated between 2.5 stars to 4 stars. In the end, I am a big Dune fan, and I guess I’m willing to forgive its flaws because it’s nice to be back in that world again. However, you have to accept it for what it is: a flawed book written by a master of the genre.