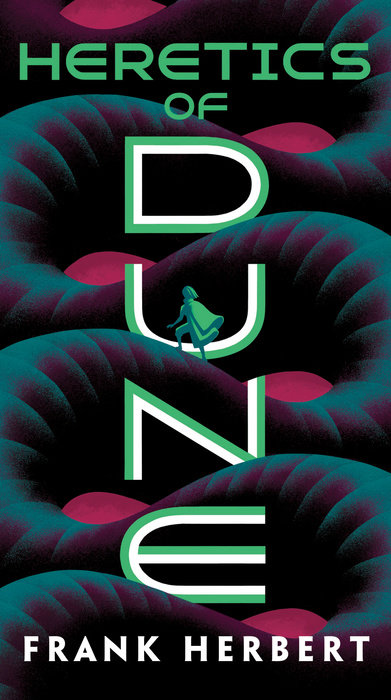 Heretics of Dune continues the long and sometimes bizarre Dune saga, which began with Frank Herbert’s original Dune, written in 1966. After the lacklustre snoozefest that was God Emperor of Dune, I was hoping this book would lift the franchise near to its potential. And you know what? It kinda did.

First of all, Heretics of Dune does indeed suffer from some of the foibles common among the Dune sequels — it’s overly long, and over-written; often reaching for a kind of literary mastery that belies a very talented writer who is stuck writing crummy sci-fi and space opera. Maybe that’s a little harsh, but it is difficult to shake the feeling that Frank Herbert didn’t want to write any Dune books after the first one.

However, once the book reaches the 1/3 mark, things do pick up — and lo and behold, the book is actually pretty good! The story is complicated, so I won’t try to summarise it, other than to say that it focuses on the inner working of the Bene Gesserit and, of course, poor old Duncan is back again in ghola form.

But the stand out character that emerges in Heretics of Dune is definitely Miles Teg, the retired military commander and mentat who is brought back into service and given the unenviable task of escorting the latest Duncan safely to Arrakis. Along for the ride is Lucilla, a Bene Gesserit Reverend Mother, who is tasked with making sure Duncan is fighting for the right team. Her weapon of choice is the ecstasy that, er, only a woman of certain experience can provide to a heterosexual man.

Apparently, author Frank Herbert was contracted to write eight Dune books in total, but died after writing the sixth. Which makes this the penultimate novel in the series written by the man himself (his son has co-written some sequels). It’s a real shame, because by the end of Heretics of Dune it does feel as though the story is really getting going.

The introduction of the scattered people is another interesting aspect to the book. It’s a shame we didn’t get to spend more time with the Honoured Matres, who are the scatterings equivalent of the Bene Gesserit. Also looped into the story is Sheeana, a young girl who can control the worms on Arrakis. Of course, the Bene Gesserit witches want her on their side. She who controls the worms controls the spice!

Heretics of Dune is a welcome return to form for Herbert

All their plans ultimately come to nought, as the complex machinations of various plots-within-plots end up with the dusty planet being bombed. The plan to mate Sheeana and Duncan never happens, but they do manage to escape with the only sandworm left alive. Unfortunately, Miles Teg must give his life to ensure this happens.

Heretics of Dune is a welcome return to form for Herbert, who thankfully ditched the dull diatribes of God Emperor and replaced them with some genuinely exciting scenes. We get new locations, new characters — and all throughout the story, the ramifications of the earlier novels are felt. There is a nice sense of continuation. Yes, Dune could have been a mainstream, blockbuster franchise, with brave Paul Atreides leading the charge. But Herbert wasn’t interested in such things. Instead, he gave us something complex, flawed and occasionally brilliant.

And hey, if you’ve ready the first four, why not read all six?