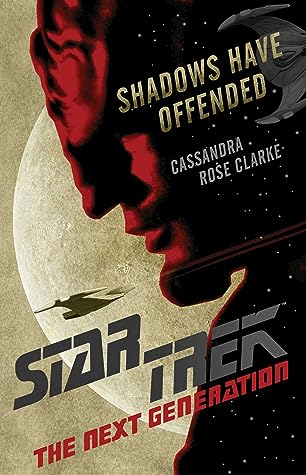 It’s been a while since we’ve had a TV-era Star Trek: The Next Generation novel hit the shelves. Shadows Have Offended is author Cassandra Rose Clarke’s Trek debut and features a story involving art theft, strange diseases and Picard’s impatience with Lwaxana Troi.

Shadows Have Offended features two distinct storylines. Story A features Picard, Worf and Deanna Troi travelling to Betazed to attend a hoity-toity revealing of ancient artefacts brought together for the first time. Story B features Riker, Data and Crusher travelling to a planet which is set to become a new world for intergalactic refugees, but everyone and everything gets struck down by a mysterious illness.

The Betazed storyline is lighthearted and fun. Aside from the main story (which involves three priceless artifacts getting stolen), it also dives deeper into the Troi/Worf romance that bubbled up from nothing in season 7 of The Next Generation. On-screen, the romance fizzled out as quickly as it came and always felt to me like a weird twist that didn’t need to happen. So I suppose it was ripe for expansion, and it can be fun when a tie-in novel expands on unexplained details from the show.

The romance itself, in the novel, isn’t exactly a huge part of the story. We see Troi and Worf getting along well, flirting a little and supporting each other. Personally, I would have liked the book to have taken it a step further and dive into a complete, blossoming romance — perhaps even showing us the exact set of circumstances that led up to that on-screen kiss.

The Crusher focused storyline, in which a mystery illness infects both man and machine, was probably the stronger of the two. I’m a big Beverly Crusher fan, and I’ve enjoyed seeing her character become more fleshed out in the books (William Leisner’s very decent Losing the Peace comes to mind). Cassandra Rose Clarke did a great job with Crusher, and it was fun to see her science-the-shit out of the mystery illness.

In fact, Cassandra Rose Clarke did a fine job with all the TNG regulars — Deanna Troi, Data, Riker and Crusher were all written consistently with their TV personas. As I read the dialogue, I could hear the actor’s voices performing the lines. Lwaxana Troi was particularly strong in the book. The story showcased a trademark Lwaxana mini-arc. She starts overbearing but slowly settles into a helpful character with surprising depth. Picard was the only character that, for me, felt slightly off — I think because he seemed so unsure of himself when embroiled in the artefact theft investigation. It wasn’t that I minded Picard in the role of comic relief (it was fun to see him struggle with the indignity of the ceremony), but Picard was always cool under fire, so to see him flailing about didn’t feel quite right.

My main gripe is that the Crusher storyline felt a bit padded out. In the book’s second act, there were at least half a dozen chapters in which team Crusher found themselves the victim of a weird set of disruptions — replicators going berserk and Data vocalising strange sounds — but then it happened again, and again… and again. Considering the book is relatively short (about 70 000 words, while many Trek novels are about 90-100 000 words), I would have liked a stronger sense of progress. For me, it was pretty obvious there was some mysterious lifeform behind the chaos, and if it was obvious to me, it certainly should have been obvious to Starfleet personnel.

One more minor quibble: it might have been nice if the two storylines tied together somehow at the end. The book has a vague theme of, “learning to make do with what you have rather than relying on the things you think you need”. For example, Crusher must figure out the mystery illness without using her technology (since that’s “sick” as well), and Worf/Troi must use subterfuge and guile instead of strictly doing things the Starfleet way. In that sense, they are vaguely linked, but if they came together somehow, it could have taken the story to the next level.

All that being said, Shadows Have Offended was a fun, light read that kept me entertained and scratched my itch for 90s TV Trek. It felt like an extended episode, but in a good way. We live in strange times at the moment, so we all need some fun escapism now and then — and if that’s what you’re after, I highly recommend Shadows Have Offended.