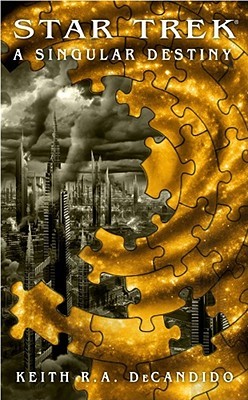 The Federation must deal with the fallout from the explosive events of Star Trek: Destiny. Poor President Bacco has developed a 24 hour migraine as she tries to patch the Federation back together. Who does she call? Why, none other than Earth’s resident problem solver and people persuader, Sonek Pran. The only battles in this book will be diplomatic ones. Star Trek: A Singular Destiny by Keith R.A. DeCandido offers a thoughtful epilogue to Destiny and also sets up some future storylines.

It was a rather dreadful week for the Federation, with over sixty billion of its citizens turned to dust. The war with the Borg made Wolf 359 look like a game of cops and robbers. A Singular Destiny includes several stories that intertwine but appear to be separate at first. There is an explosion at an important mining site. The Klingons lose a planet of little strategic value. And the Romulans will no longer accept the Federation’s leftovers.

Mr DeCandido excels at a certain type of storytelling that I think of as A simple story, well executed. This book, however, tries to weave a more complex story. It worked mostly, but at times it felt a bit bogged down. Nearly all the characters are original, so there is no giddy thrill of seeing Picard or Janeway on the page.

The brief excerpts and communiques throughout the book showing different people struggling with the aftermath of the war are interesting, even if they felt a bit like filler. Like his previous Trek book, Q&A, DeCandido likes to use different, one-shot characters to offer different viewpoints on a single thing. In Q&A, it was the cosmic tear in spacetime. In this book, it is the aftermath of the war.

Nearly all the characters are original, so there is no giddy thrill of seeing Picard or Janeway on the page.

Somehow, the prose of A Singular Destiny didn’t feel as tight as his other works. It would often tell the reader what had happened, and explain things, rather than showing the reader using real-time, concrete scenes. Take this excerpt, for example:

“Altoss was waiting only semi-patiently. Sonek didn’t need any particular skills in reading body language to see that the Efrosian ensign was ready to jump out of her skin”

This passage tells us how Altoss is acting. It doesn’t show us. We could rewrite it:

Altoss shifted her body weight, her eyes darting around the room. The Efrosian ensign glanced down at her phaser, her hand curling into a fist.

This kind of immediate, action-based writing is a lot more dynamic and engaging.

That said, DeCandido is still an excellent writer. He brings his trademark relaxed, fun style to the story, even when it deals with heavy themes. It explores the tragic side of life without feeling overly sentimental or saccharine. My one gripe was Pran’s reaction to the death of his wife. It was a story element that felt shoehorned in, and I didn’t really buy his grief. I might have made it so she had already died at the beginning of the book, and he was still struggling with the pain of it.

I can’t say I’ve ever felt much love for exploring the intricacies of Romulan politics — a subject that bogged down some of the early relaunch titles. In A Singular Destiny, however, I found Sonek’s meeting with Donatra to be one of the most enjoyable aspects. Sonek, as Federation diplomat, tries to broker a piece between Donatra and her Romulan counterpart Tal’Aura. He tries and fails. But it’s interesting to see how it all plays out.

The book offers a direct lead-in to the upcoming Typhon Pact series. It does an excellent job of naturally building a prelude event without telegraphing it, or tacking it on because the editor said so. That being said, it’s super weird that DeCandido himself did not write any of the Typhon Pact novels.

It was also a lot of fun to catch up with Ezri Dax and her crew aboard the U.S.S. Aventine. Although I didn’t totally buy the whole Bowers v Pran thing, I enjoyed the scenes where he was onboard, joining in on the jam sessions and stirring up trouble. I think it would have been great for the U.S.S. Aventine to get its own book series. I know they will show up here and there in future books, but I don’t think we will get to see them in much detail.

My impression of Keith R.A. DeCandido is that he is an outgoing guy who loves to talk. He stated in an interview that he wanted to give Sonek Pran the “superpower” of being able to speak to people. He certainly does, er, speak to many people.

Overall, A Singular Destiny is another solid read from DeCandido, and it has made me excited to get to the Typhon Pact series. Good on ya’ KRAD, keep up the good work.