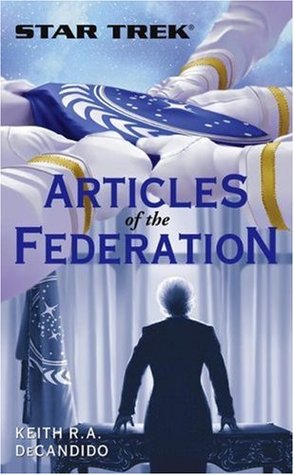 At around the time that the post Nemesis books were taking shape, Pocket Books editor John Ordover approached seasoned Trek novelist Keith R.A. DeCandido with an idea. How about we make a book which is The West Wing in space. Subsequent editor Marco Palmieri would eventually see the book through to completion.

DeCandido, the author of 9 previous Trek novels, stated in an interview that he based the character of Federation President Nan Bacco on his great grandmother. He also stated that he was a fan of The West Wing and generally became something of a news junky around election time.

After the last Federation president accidentally mailed an arsenal of deadly super-weapons to a planet that probably shouldn’t have had them, the bombastic Nan Bacco takes office. She has won a tight electoral race and must set about navigating the world of politics whilst talking about baseball whenever she possibly can.

A bunch of Remans, also former Shinzon loyalists, borrow their uncle’s jalopy of a spaceship and start heading to Federation space at warp 3. However, the Klingons are technically their protectorate so that causes a bit of a diplomatic headache. Furthermore, a race of people who have a thing for sla/sh/ing their wor/ds, the Trinni/Ek keep having an allergic reaction to the horderves served at Federation functions.

A journalist gets wind of the aforementioned political coverup, a trade agreement with a bunch of nasty slavers gets shredded, and there is an awful lot of people watching Illuminating The City Of Light. It’s good to know cable TV news shows are still a thing 400 years from now.

In some ways, it’s difficult to review a book like Articles Of The Federation. On one hand, it’s well written and very thoughtful. It manages to combine many different viewpoints and explores in-depth a side of Star Trek we rarely get to see in detail but is alluded to many times.

In another way, the book was at times boring and a bit derivative. Read any review online and The West Wing is mentioned every single time without fail. It’s such an obvious homage to that show. I personally loved The West Wing but that doesn’t mean I want to see it replicated and retrofitted into a Star Trek book.

Ultimately I think the biggest issue was the simple lack of a through-line in the story. DeCandido weaves a complex thread of different storylines, but they start and end at different points. I think a bigger umbrella plot was needed to tie the story together. For example, the Remans could have somehow affected the coverup of the previous president, which could have affected the Trinni/Ek’s decision to join the Federation. Maybe there could have been some higher stakes. What if the Trinni/Ek controlled the other major source of Kellinite, so to break ties with the nasty Aligar’s, they had to convince the Trinni/Ek to join the Federation despite the mistakes of the previous president.

I personally loved The West Wing but that doesn’t mean I want to see it replicated and retrofitted into a Star Trek book.

What I am getting at is simply that the story could have come together into a more cohesive whole, rather than feeling like a selection of loosely connected short stories.

On the positive side though, there is no doubt DeCandido is a natural-born writer, with a stellar grasp of Star Trek detail. The book is littered with Easter eggs for hardcore fans, but none of them has the required knowledge for one to enjoy the story.

I have always felt science fiction and space opera as a whole has rarely explored the topic of journalism. The fourth estate is such an important part of any modern liberal democracy. So I enjoyed spending some time with some brave, truth-seeking journalists and exploring the nuances of the importance of truth vs the damage that the truth may cause.

As with many other people, I found the standout characters from the book to be the president Nan Bacco and her steadfast chief of staff Esperanza Piñiero. I’m happy to say we’ll be seeing them again in the upcoming Destiny trilogy.

Articles Of The Federation received generally positive reviews. At the time of publishing this review, it has an impressive 4.08 rating on Goodreads. Trek Lit Reviews stated that the book has “firmly established itself as one of my all-time favorite Star Trek novels.” Library Is Unknown Right described it as “an interesting look at a rarely explored corner of the Star Trek universe.” In a short but glowing review, J.L. Gribble stated that “This was a dense read, but maintained a fast pace […] with enough drama that it never dragged.”

Book sales were poor. This is backed up by DeCandido himself, who stated in an interview the book was well-reviewed and liked by fans, but performed poorly sales-wise.

I think part of the reason why the book sold poorly was because a) It was not associated with a specific Star Trek iteration and b) it had a pretty boring front cover.

DeCandido himself has described this book as a commercial flop, yet a book that had wide-ranging implications for the Star Trek litverse. I don’t disagree. Nan Bacco and the Federation’s political system is the star of the show here, and the book helped pave the way for future stories to incorporate these elements.

That said, I just wish the overall story was a bit more compelling. It’s a well written, clever read filled with lots of lovingly researched and thought out detail. It just didn’t keep me turning the pages.