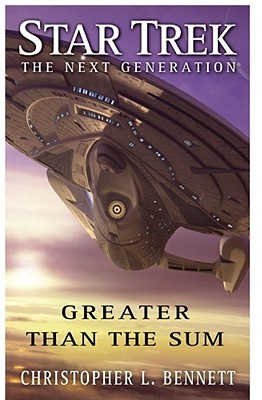 Star Trek fans criticised previous relaunch books for their inconsistencies in tone, character, and direction. Can Christopher L. Bennett tie together the previous books, set up the forthcoming Destiny trilogy, and save the litverse from ruin?

Editor Margaret Clark offered Bennet the opportunity to write this instalment of the relaunch timeline back in 2007-2008. The relaunch timeline had, thus far, met with limited success. Book sales were modest and fans found the new characters unpalatable. Additionally, I’m guessing everybody was getting sick of the Borg.

Bennet said one goal in writing Greater Than The Sum was to, “give readers a greater understanding and appreciation of characters and events from its preceding novels.” It seems everybody agreed someone had to tie up the loose ends and get this literary franchise back on track.

Recognising Borg fatigue amongst the fans, Bennet also stated that the Borg would take a back seat in the story. Instead, it would introduce a new character, T’Ryssa Chen, and a new form of life; a kind of computerised planetary intelligence with a keen interest in the topic of procreation (more on that later).

Bennet also consulted with David Mack, who was busy clacking away on his keyboard, dreaming up the forthcoming Destiny trilogy. Mr Bennet certainly had his work cut out for him writing this one.

The story starts by introducing T’Ryssa Chen, a half-Vulcan/half-human, who thoroughly eschews her Vulcan side. She blags her way onto an away mission to alleviate her bridge duty boredom. Once on the planet, they meet some rather friendly and curious creatures (Noh Angels), but then the Borg show up and totally ruin the party.

These Noh Angels save T’Ryssa from the Borg using their awesome technological abilities. Meanwhile, T’Ryssa’s ship (the U.S.S. Rhea) is partially assimilated. Eventually, T’Ryssa winds up aboard the Enterprise, whose mission is three-fold; destroy the assimilated ship Einstein, rescue the Rhea, and defeat the Borg.

However, the Noh Angels have other ideas. They prefer people to be peaceful; so they keep the Borg and the Enterprise apart. Meanwhile, the Borg are drilling into the Angel’s planetary brain, sucking out all that gooey and delicious technological goodness. Picard, with Chen’s help, must convince the peace-loving Noh Angels to release their grip and let the Enterprise take care of business.

They are partially successful. Although the Borg cube is defeated, the book’s concluding epilogue ends with Leybenzon dying on another Borg ship, having accidentally delivered the Federation’s secret weapon right into their hands.

The first few chapters of Greater Than The Sum spend much of their time apologizing for the previous books, almost retconning them. Bennett covers aspects such as T’Lana’s short stint as ships counsellor, Leybenzons resignation, inconsistencies with the Borg, and a few other bits and bobs. I admire the idea; clean up some of the past wrongs and create a more congruent continuity. However, the book’s first act did get a bit bogged down in the detail.

Perhaps the message could have been a bit more balanced.

Bennet also introduces the new character of T’Ryssa Chen. She’s sassy, quirky, and very un-Vulcan. Her character was, at times, a bit over-the-top. But she was still a huge improvement over the dull and unlikeable T’Lana and Leybenzon. I was glad that Bennet restricted the new characters to a single person. Like Sword Of Damocles, I found that focusing on a single character helped to centre the story.

The book focuses heavily on the theme of family, children and procreation. This theme is woven into every chapter. For example, Chen has daddy issues, Picard fears the Borg incursion makes having a family too risky, and The Noh Angels just can’t seem to wrap their heads around the whole procreation thing. Additionally, the liberated Borg (E.g. Hugh and his partner) are searching for a way to reproduce to keep their society going. This leads up to Crusher falling pregnant just as the Borg launch a devastating incursion into Federation space. Queue the forthcoming Destiny trilogy.

Although I appreciated Bennet’s dedication to a central theme, I had two minor quibbles. Firstly, the theme lacked subtlety and was too enmeshed in every aspect of the story. Secondly, the book pushes a single message; children are great and wondrous and you should have children even if a) You spend most of your life away from them on a starship or b) the Borg are coming to eff you up and murder everyone you love.

Perhaps the message could have been a bit more balanced.

All that being said, Bennet does many good things with Greater Than The Sum. He brings one of his trademark big, wacky ideas (sentient, naturally forming planetary computers anyone?) and integrates it into an entertaining story. His original creation, T’Ryssa Chen, is a breath of fresh air. The book was tighter than Bennet’s previous novel Star Trek: Titan: Orion’s Hounds, which I appreciated.

Greater Than The Sum received generally positive reviews online. It holds an impressive “outstanding” rating on Trek BBS, with many people praising the new character of Chen. Trek Movie gave it a positive review, stating it featured, “[..] a unique new construct, effective use of thread-bare villains, and a heavy dose of character development.” Trek Lit also gave it a glowing review, stating that the book, “[…] turned out to be a very thoughtful and compelling story.” However, Unreality Sc-Fi were not such big fans, “To say Greater than the Sum was an utter disappointment would be a huge understatement”.

Book sales were again modest, as was the case for most relaunch Trek novels at this point.

Greater Than The Sum is, despite its imperfections, one of the stronger entries in the post-Nemesis litverse. It features a welcome cast shakeup with the introduction of Chen, who was a bit over-the-top, but still an enjoyable addition to the Enterprise crew. The story was original, entertaining and it cleverly moved the Borg into the back seat so it could focus on more original ideas. Yes, the book’s theme(s) lacked subtlety, but it was still a fun adventure with plenty of big concepts and thought-provoking moments.