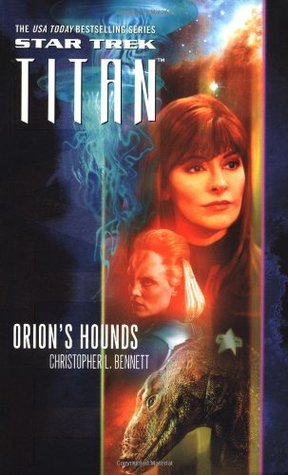 Now that the Dominion War is over, Starfleet can get back to good old exploration. Will Riker and his team of diverse Starfleet personnel must now face a band of space whalers, who aim their long harpoons at the poor old Space Jellies from TNG season 1 episode 1.

Back in 2006, Christopher L Bennet wrote this third Titan novel at about the same time as Martin and Mangel’s wrote the first two (Taking Wing and The Red King). Bennet himself described the book as still part of the “pilot” for the Titan series. I guess all three books were a long multi-part special. And true enough, it was the first book that made true on Titan’s promise to go where no one had gone before. Except they don’t really because the species they encounter is from the very first episode of TNG! Anyway…

Editor Marco Palmieri’s set the goal for the Titan series early on: Tell sci-fi stories with a focus on exploration rather than Federation politics and feature a highly diverse crew. Bennet’s work on the previous Star Trek book Ex Machina displayed some of the good stuff Palmieri was looking for, so he invited Bennet on board to help launch Titan into the great unknown.

The theme of the novel explores the relationship between hunter-warrior cultures and their prey. This was a theme Bennet has explored before in his Trek short story The Spirit Of The Hunt.

Since I read this book some time ago, I can only remember the broad strokes of the story. But it goes a bit like this…

Titan is off heading towards the Bubble Gum Nebula when, without warning, all the psychic members of the crew come down with a serious migraine. It turns out that a race of space creatures, sometimes called “star jellies” (why!?) are being hunted down, killed, and then retrofitted into space ships.

Upon encountering this twisted horror-show version of Pimp My Ride, Riker confronts the hunters and tells them to stop turning these sentient beings into zombie spaceships. However, he learns that these people are reliant on them for survival. They use them to attack even bigger, more dangerous space jellies - the kind that considers eating up an entire planet for breakfast part of their daily wellness routine.

To help them get through it, Troi teaches Tuvok a few tricks of the trade when it comes to controlling his psychic powers, and Riker eventually manages to broker peace between the cosmic bowls of jello and their hunters.

When I first picked up Orion’s Hounds, I thought the book started very strong. I felt like it was on track to be one of my absolute favourites. It was like good old Trek in many ways. A mysterious encounter affects a bunch of the crew, they slowly unravel the mystery and find a peaceful resolution.

However, I found the book, particularly towards the end, spent way too much time with the Pa’haquel. It engages the rather boring trope of meeting a bunch of people who are the backwards, old fashioned types that humans once were. And it also manages to push this notion of hunters as animal-loving conservationists who worship the animals that they kill. This idea of the noble hunter just isn’t something that particularly gels with me. We’ve gone from saving the whale(s) in Star Trek IV to cruising around space in the carcasses of zombie-space-whales. Ugh…

It was such a weird read. An excellent first half but a long, dragging second half.

We’ve gone from saving the whale(s) in Star Trek IV to cruising around space in the carcasses of zombie-space-whales.

Also, by the third book, one gets a bit bored about hearing how diverse the crew of Titan are. Yes, they are very diverse… Incredibly diverse… we get it! While it is an interesting point of difference, I’d like to see the diversity have a concrete impact on the story rather than constantly mentioned in the ancillary moments.

I actually skim-read the last few chapters of the book. The damn thing felt like it was never going to end! That being said, the book is well written, has an interesting premise and does a good job with some characters such as Ree, Troi and Tuvok. It could have been a great read but wound up being just average for me.

The book has received fairly positive reviews online. Trek Lit described it as “easily one of the best of the modern Star Trek novel era.” Unreality SF said in a glowing review that it was “the first real highlight of the Titan series.” In a more critical review, Jim’s Books / Shashtrix said that it was “fairly average on the scale of Star Trek novels.” It holds a decent Goodreads score of 3.79.

Book sales were below average

With an interesting premise and an engaging first act, I thought Orion’s Hounds was truly going to deliver on Titan’s promise and potential. However, I was disappointed to find the book to be overly long and filled with generic alien characters I cared little for. It could have been something great but didn’t quite manage to keep me reading until the end.