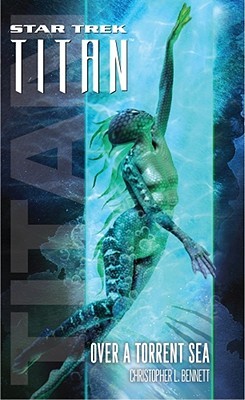 Christopher L Bennet and I got beef. Of course, he wouldn’t know me from a bar of soap. But reading through the post-Nemesis Star Trek litverse, I’ve now read 14 books in the series. And I hate to say it, but Bennet is my least favourite Trek writer.

Over A Torrent Sea, published in 2009 and the fifth Titan spinoff, is the perfect example of why Bennet and I don’t gel. But firstly, let me list some of the things I like about Bennet. He has an imagination bigger than a member of the Q continuum, a solid grasp of character, and he’s dedicated to Trek lore — often choosing to plug small gaps in Trek canon with well-considered Easter-eggy details.

What’s not to like then? You see, Bennet commits the cardinal sin of genre fiction. His books are boring. They are books that sit on my nightstand, haunting me, the bookmark permanently stuck halfway through. Except for his decent Trek novel Greater Than The Sum, I’ve found all of his Trek books so far to be boring. But Over A Torrent Sea was the boringest of them all. It reads somewhere between a marine biology textbook and a fanfiction epic posted on Archive Of Our Own.

Sigh. Look, it’s not in my nature to criticise the author, even if I do criticise the work. But time and again, Bennet takes a fantastic idea and fumbles on the follow-through. The frustrating part is that the concept behind the book is awesome. In brief: The Titan crew stumble on a planet where sentient life exists solely underwater, so their technology is biology-based. Since warp drive and such things are pretty hard to construct out of seaweed and starfish, they fall under the prime directive as insufficiently advanced for contact. But when a nasty asteroid, laced with Titan based impurities is heading their way, the crew of Titan choose to step in.

Even just writing that out, I am reminded that the book was teeming with potential. However, in practice… Let me provide an excerpt to illustrate my point.

“The interface between the upper ocean and the hypersaline layer was not a sharp divide. The two layers had separate convection currents, keeping them from mixing too extensively, but there was a gradual transition from one to the other, more like the distinction between two layers of an atmosphere or a stellar interior than between two strata of rock, say. Nonetheless, the pod was slowing as the water around it grew denser and more buoyant, and once it was confident it had become sufficiently immersed in the dynamo layer, Cethente set the antigravs to give the pod neutral buoyancy, halting its descent. The Syrath set the sensors to maximum gain, and opened its own senses as well—the same senses that had allowed its species to develop an advanced knowledge of astrophysics while living on a perpetually clouded world.”

This is the kind of writing I’ve seen referred to as “hyper-detailed”. It’s usually based on the (correct) belief that specific, concrete details from the narrator help create an authentic, vivid reading experience. However, to create this authentic/vivid/concrete fictive reality, the writing must also be concise. The above passage? Concise it is not.

I know that in the future humanity is super smart. Quantum physics is a standard high school subject. Warp theory gets taught at the academy. But I found it hard to believe that everyone on Titan was instantly an expert on marine biology. Perhaps it could have been better to have one character be the expert, and then they explain it to the others. This could have helped avoid the massive infodumps and grounded the narrative in more scenes.

Hell, I'd rather get operated on by Reginald Barclay.

And then there is the story itself. We get to see Riker — starving, dehydrated and delirious — laying about in a loincloth and unable to help the mission. To some extent, a media franchise needs to challenge the fans, but also give the fans a little of what they want. Do Trek fans want to see Riker reduced to such a pathetic and helpless victim?

But that’s nothing compared to what happens with Ree and Troi. The good dino doctor kidnaps Deanna and forces her to give birth on another planet, which is also pre-Warp and pretty terrified when a dinosaur rocks up and takes over their hospital’s maternity ward. What? Ree, who is probably the most likeable of the original Titan characters, acts so stupidly that I might never take him seriously again. A doctor who kidnaps his patients when they’re pregnant. Think about it. I’d rather get operated on by Tom Paris. Hell, I’d rather get operated on by Reginald Barclay.

Most of us Trekkies approach the books with a fairly forgiving, easy-going attitude. We don’t expect them to be exceptional novels. We just want Picard to say “engage”, Janeway to drink her coffee black and Spock to raise a single eyebrow. Give us a bit of what we know and love, and mix that in with the big, wacky ideas. It can be a tough task to translate the magic of Trek to the humble page of the written novel. As I said, a Trek book doesn’t have to be exceptional — but please don’t make it boring.

Sorry folks, but I have to give Over A Torrent Sea the same score as the disastrous Before Dishonor. Good ideas are let down by lousy execution. It’s nothing personal Mr Bennet.