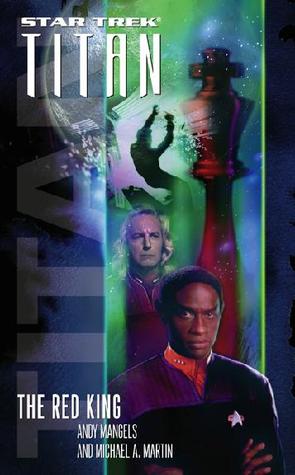 Star Trek Titan finally hits warp speed in this direct follow-up to book #1 Taking Wing. Launched into the far reaches of a satellite galaxy, can Riker steer his crew to safety?

Authors Michael A. Martin & Andy Mangels wrote The Red King back in 2005, right after writing Taking Wing, and at the same time as Christopher L Bennet wrote Orion’s Hounds. While Taking Wing fulfilled its need to honour Nemesis and the subsequent Romulan political fallout, The Red King could focus on exploring the great unknown.

During an interview with Martin on the podcast Literary Treks, Martin revealed that Pocket Books editor Marco Palmieri pulled together a writer’s bible for Titan with input from many authors, including Martin, Mangels, Bennet and David Mack. He couldn’t remember who had created which characters etc., but clearly it was a real team effort. It was up to Mangels and Martin to set the benchmark, tone and general vibe of the Titan novels.

The book also is a pseudo-sequel to Mangel and Martin’s earlier Lost Era novel The Sundered. The Neyel people were first discovered in that book by Captain Sulu and the crew of the USS Excelsior, which included Sulu, Tuvok and Akaar.

After Shinzon’s rather naughty experiments with thalaron radiation ripped a hole in the galaxy’s best shirt, Riker and his crew, along with some Klingons and Romulans, get sucked into a spatial anomaly known as The Great Bloom.

Donatra and Riker form an alliance, which is pleasant enough at first. They discover the Neyel people, a bunch of human’s that did a whole lot of the sort of genetic engineering Bashir from DS9 would have kept under his hat. But life was tough out there in the Small Magellanic Cloud, so they had to adapt or die.

A burgeoning proto-universe starts putting its finger into our universe’s pie, which puts the Neyel and their neighbourhood in a rather compromising position. So Riker and Donatra launch a rescue effort, converting Vanguard into a makeshift arc. However Donatra doesn’t want word of her detonated warp cores to reach the Klingon’s, so she takes matters into her own hands. Riker isn’t impressed, but he bites his tongue when push comes to shove.

With a couple of million Neyel rescued, Riker finds the Titan moto he’s been looking for.

After the lacklustre Death In Winter and awkward TV pilot feel of Taking Wing, reading The Red King was a breath of fresh air. I liked that it felt very Trekky. It doesn’t have a bad guy as such, more just a set of moral quandaries. Characters are forced to make difficult decisions given near-impossible moral choices. Riker chooses to put his crew at risk to save as many Neyel as he can because he’s Federation and that’s just what they do. Human’s in the future are good.

The book is also a nice end to the Titan pilot book/episode. It both respects the Trek of old but brings a nice hit of difference. I laughed when Riker walked onto the bridge while Vale was freaking out about the champagne and overcrowding. Riker was like: “Cool, a party. Queue the jazz music!” Very different from Picard, who would have ordered a full investigation into how such a thing could have occurred.

Also, I thought the ship’s Dedication Plaque Motto was going to be “All of you.”

Let’s look at the scene that inspired Riker’s decision:

“Thank you, sir. All of you,” Tuvok said, then turned and exited the ready room. \[…\] Riker realized he had finally, at long last, found that elusive perfect epigram for Titan’s bridge dedication plaque.”

I think that would have made an awesome motto. Oh well.

The Red King managed to be both a wonderful Trek adventure and a fantastic starting point for the diverse crew of the Titan. In many ways, it was what Taking Wing should have been. The characters behave as they are, rather than get introduced and explained. There are difficult choices to be made. There is betrayal. There is hope. There are very important bracelets.

I also thought how the Neyel referred to Earth as Auld Aerth was a nice touch. It was a clever little play on language.

My two minor gripes are as follows. Firstly, the book does sag just a little in the middle. We change perspective a lot, which gives us little snippet’s of different experiences but doesn’t drive the plot forward. Secondly, I’m not certain Riker would let the murder of the IKS Dugh slide quite so easily. This is Trek, in which a human’s honour and moral code are unshakeable. He did lie to the Klingon’s about what happened, even though Donatra killed them in cold blood.

The Red King received mixed reviews. It holds a lowish score of 3.66 on Goodreads, which does confirm my theory that Goodread’s scores are crazy and one should never pay attention to them. Trek Lit gave it a generally positive review, saying it was “a good conclusion to the beginning of Titan’s mission of exploration.” Motion Picture Comics stated, “Mangels & Martin have done an excellent job in setting up the new Titan series.” Trek Today said in their review that “the plot at times shows the strain of trying to tackle a little too much.” While Some Kind Of Trek gave it a just-okay review, saying “All in all a decent read but not probably one you would reread.”

I enjoyed the book more than most. Sales for the book were below average.

The Red King, despite some negative online reviews, was a fun read from start to finish, and an improvement on its predecessor Taking Wing. It felt to me like TV era Trek, and that’s not a bad thing.