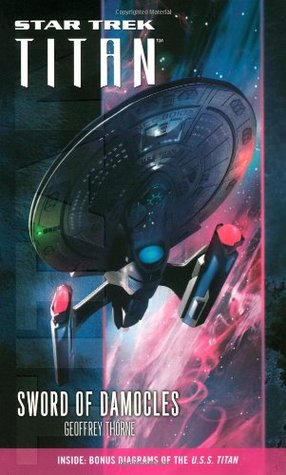 In Greek literature, there was a man who coveted the king’s position. So the king agreed to let the man experience what it was like to have power. When the man took a seat at the throne, the king arranged to have a sword dangling above the man’s head, held in place by a single thread. In this Titan novel, the sword is “Erykon’s Eye”, and it dangles above an entire planet, threatening to unleash its awesome wrath. And Titan is caught in the crossfire.

It’s hard to find much information about author Geoffrey Thorne. He has only written one Star Trek novel (this one). The book was written back in 2007. I believe Thorne had a Trek short story published in a Simon & Schuster anthology, and that presumably lead to the offer to write a full-length novel.

Other than Trek, Thorne has written a smattering of short stories, tv scripts and comics. He was also once an actor!

In any case, he no longer appears to be active in the creative writing space. This is the fourth Titan novel all up, and it was a two-year gap between this one and the preceding novel, Orion’s Hounds.

The Titan is merrily flying about the galaxy, but becomes stuck in some cosmic quicksand and can’t seem to pull itself out. Warp is a no go. The crew determine the source of the spatial anomaly is coming from the nearby planet of Orisha.

So they send a team out with the task of making contact with the Orishans. But they’re attacked and they dive into the anomaly for cover, only to find they have been sent back in time. Jaza and Modan are 1000 years in the past, but the rest only slip back by a few days.

From here the story gets a little bit twisty. Modan manages to get back to the present, but Jaza stayed behind, in part thanks to a vision from the Bajoran Prophets. Meanwhile, Titan learns that the ship protecting the Eye is in fact a living being, of a sort anyway. They put the poor thing out of its misery, and Titan finally manages to get its warp engines humming again.

I have mixed feelings about Sword of Damocles. Thorne writes with a real literary flair, and generally, it’s a joy to read. To book has a stunning opening chapter where we learn about Jaza’s past, his involvement with the Bajoran war and his spiritual beliefs.

But then some chapters tend to get a bit bogged down in florid, aureate prose. There is an old creative writing adage: Show, don’t tell. There were a few times where it was all “tell” and no “show”. I think the book could have benefited from a few more scenes with characters actually interacting.

The other issue is that the story was a bit confusing at times. I enjoyed the twisty, time travel aspects of the story. But there were a few moments where I had to stop and review what I had just read.

I felt like I understood the story quite well. But then I listened to the excellent Literary Treks podcast review. They recapped the story and l realised that I had in fact missed a few nuances of the plot. It was nothing major but really goes to show just how layered the story was.

Basically, this kind of story will be a bit divisive. On the whole, I liked it, but I do think it could have benefitted from a bit more clarity.

All that being said, the book does an excellent job focusing on the character of Jaza. The way Thorne dealt with Jaza’s religiosity was very clever. He managed to explore Jaza’s religious beliefs in a nuanced and respectful way, while also incorporating them into the plot.

I also thought it was a great choice to focus on one main character (Jaza) rather than constantly changing perspectives to different Titan crew. You would think a novel, being a long-form medium, would suit shifting perspectives amongst a large cast of characters. But I found having a single main character really helped give the book a sense of focus. It seems like they may continue this approach with the next book.

Maybe Sword of Damocles did bite off more than it could chew. It is very clever but tries to be so clever it’s almost subversive. Maybe Thorne could have scaled the ambition back just a smidge, and the book would have won a few more fans.

The last thing I’ll say is that I thought it was a mistake to leave Jaza in the past. As Trek Lit pointed out, we’re losing a character in each Titan book. It undermines all the good work Thorne did in this book, bringing Jaza’s character to life and making the audience feel a connection to him. What a shame not to see him again (I assume, anyway!).

Online reviews of this book were mixed. Sci-Fi Online said, “Despite these flaws, and the fact that the story is rather slow to kick off, Sword of Damocles is ultimately rewarding.” Motion Picture Comics described the book as, “[…] another strong, enjoyable instalment in this series of novels.” However, Unreality SF gave it a negative review, “Sword of Damocles is an utter disappointment.”

The book enjoys an “Above Average” rating on Trek BBS. Book sales were modest, which might explain my Thorne did not write any more Trek novels.

Sword of Damocles was an ambitious read with literary ambitions, and it may have bitten off a bit more than it could chew. However it did an excellent job bringing Jaza’s character to life, and the story was compelling… even if at times a bit confusing. It’s a shame Thorne has not written any more Trek novels, I’m sure they could have been something special.