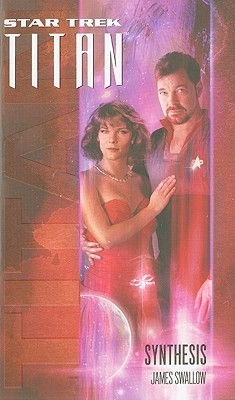 William T. Riker and the diverse crew of the U.S.S. Titan are back, this time in the hands of British author James Swallow. Following on from the lackluster Over A Torrent Sea (by Christopher L Bennet), I was hoping that Mr. Swallow could inject some fun and action into this spinoff book series. Did he succeed?

The book begins with Malora Pazlar discovering an intriguing set of subspace distortions. Meanwhile, Riker is trying to take a hard-earned holo-holiday with his wife, Deanna Tori, and daughter, Natasha. He bumps into the reptilian Dr. Ree, who is a little bashful after he, y’know, kidnapped the captain’s wife and all that business (see Over A Torrent Sea).

The next scene, in which Riker has awkward chitchat with Holor Sethe, is the first clue that James Swallow has an excellent grasp of Titan’s characters. I don’t remember Sethe from any of the previous Titan books (he may be a Mr. Swallow original) but the amusing scene in which Riker, dressed in a Hawaiian shirt and swim shorts, impatiently waits to use the holodeck while Sethe is performing some unnecessary maintenance — was fun, funny, and also set up the story to come.

The character work continues with Tuvok, Pava, Modan, Torvig enjoying a friendly Bajoran card game (at least I think that’s what it was — well, some kind of card game anyway). It was nice to see Tuvok doing something other than announcing things from the tactical station. In the next couple of chapters, the young Cardassian Zurin Dakal and the Pak’shree K’chak’!‘op are introduced with equal success. (Luckily, the book uses the abbreviated Chaka instead of K’chak’!‘op, so I don’t have to keep mentally trying to pronounce that name every time it comes along on the page).

Storywise, things kick into gear when the crew investigates some wreckage, only to find that the wreckage is the remains of a sentient AI machine. It wakes up, feeling a bit confused and sorry for itself, and finds its way into the Titan’s computer system. While it’s in there, it buddies up with Titan’s impressive app store and software collection, and decides to “uplift” the Titan’s computer so the ship itself manifests as a holographic, sentient being.

The alien Sentry known as White-Blue turns out to be a very different kind of AI to, say, Data (an inevitable comparison to make, I know). White-Blue is passionate, flawed, untrusting, and a bit temperamental. But through the story, it learns to understand Titan’s ways, and eventually helps them.

Meanwhile, the bad guy reveals itself — the thing responsible for White-Blue’s initial troubles is revealed as The Null. Small aside: I do wonder if James Swallow ever worked in software or web development, as he skilfully uses a lot of programming terminology in the book, such as “null” — which basically means “nothing.” Anyway, The Null is a hungry, cancerous type of protomatter that has been breaking into this region of space, and its favorite food just happens to be on our side of the inter-dimensional divide.

The character work in this book continues to shine as Torvig and the now sentient Titan Avatar (as I will now call it) become fast friends. Torvig’s species, who are enhanced with all kinds of crazy cybernetics, were uplifted into self-awareness much in the same way the Titan Avatar was. It turns to Torvig for guidance, support, and even advice. This is the first Titan book so far that has made me connect with Torvig. In the previous iterations, I found him a little annoying. But in this book, we see more of his sweet and naive side. The scenes where he and the Titan Avatar interact are some of my favorites in the book.

The Sentries (the AI machines) eventually have had enough of Titan and ask the crew to be on their merry way, so that they can focus on fighting The Null. But things get complicated when Tuvok and co get stranded on a moon-sized exiled computer mind, Zero-Three. Another Sentry, Red-Gold, thinks Titan could help them out in the battle and decides to take control by force, rather than being polite and just asking. AI robots just have no manners these days.

Probably my favorite part of the story is when the Titan Avatar is asked to (temporarily) shut itself down, and must trust Riker and the crew to wake it up again once the battle is over. It was a great moment, in which it learns to believe in Riker and his crew, and it also demonstrates how the crew’s attitude towards its latest crew member evolved from distrust to complete acceptance.

The actual ending itself is okay — I did feel the part where the Titan Avatar sacrifices itself by sending its matrix or whatever into The Null was a bit hammy and half-baked. To be honest, I don’t even really quite understand what it did — like, did it reprogram the subspace protomatter somehow? And how could a computer program do that? I realize that things had to reset a bit after the story ended, so why not simply have the Titan Avatar join the Sentries to help them grow, now that they no longer have The Null to worry about? Yes, it would have been a bit predictable, but that’s not always a bad thing when it works with the story.

I can’t say I love every character on Titan just yet. Although I must say this book did an excellent job with the characters in general, particularly Torvig. Ranul Keru is a bit whiny, and Ra-Havreii just somehow never quite clicked with me. There were some good Tuvok scenes, but I still feel he is an under-appreciated and under-used character. On a more positive note, I enjoyed a couple of nice moments in which Troi takes command of the bridge — I’d love to see a book where Troi goes into kick-ass commander mode, a bit like Janeway did in a couple of Voyager episodes.

Generally, the book received positive (if slightly mixed) reviews online. It holds a “Very good” rating on Trek BBS. TrekLit gave it a mediocre 6/10, which I felt was a bit harsh. Having read a few other online reviews, there were two common criticisms. One was that the stakes were too high (seeing as The Null could destroy the entire galaxy). Treklit readers, at this point, are obviously a bit fatigued with constant, galaxy-ending events in the books. That being said, Synthesis didn’t lean heavily on this — it was almost an afterthought. The other criticism was things wrapped up a bit too neatly, which I suppose I agree with, but it wasn’t a major detractor for me.

As it stands, Star Trek: Titan: Synthesis by James Swallow is pretty much everything I want in a Titan/Star Trek novel. It’s fun and we get some good character moments. It balances thoughtful themes, with some solid action — and a healthy scattering of lighthearted moments too. I have high praise for Mr. Swallow’s character work; yes, it did probably benefit from the fact that five books in, I’m generally more familiar with the characters, so there is no confusion over who’s who in the Titan zoo. Synthesis is my equal favorite Titan novel thus far (alongside The Red King).

Since the excellent Literary Treks (podcast) haven’t reviewed this one, you may like to check out The Captain’s Table podcast. They also interviewed James Swallow.