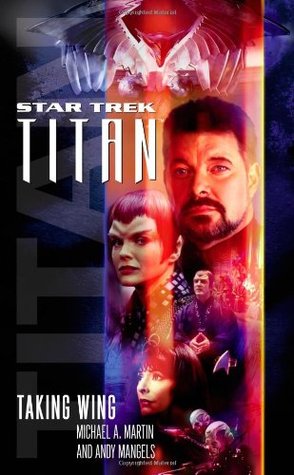 Riker finally gets that 4th pip and has left The Enterprise to captain The Titan. Can this book of new diverse characters find its feet and deliver a compelling read?

Taking Wing was published in 2005. Authors Martin and Mangels started off their careers writing for fan magazines and comic books. The pair had been writing Star Trek in various forms together for a decade before being entrusted with kicking off this new franchise.

The writers were in part inspired by the early episodes of Voyager, in which a politically diverse crew did not always get along. They (like me) felt disappointed that the tension between Voyager crew members faded in just a few episodes, so they decided that the same tension could be carried into this series in a more ongoing fashion. As a further point of different to other Star Trek entries, Titan would feature an incredibly diverse cast of characters, including many aliens (some of them non-humanoid).

Curiously, the first three Titan books were written (or at least outlined) at the same time. The first two were written by Martin and Mangels, while the third book was written by Christopher L Bennet. The sense I got from an interview with Martin and Mangels is that they created the entire cast of Titan, with some input from managing editor Margaret Clark and fellow author Bennet.

With the show and movie franchise essentially dead in the water, the authors were given a lot of freedom with the cast and general direction of the Titan series. Martin and Mangels would only write three Titan books in total.

Starfleet is finally ready to start exploring outer space again, now that the Dominion war is over, the Borg invasion was sent packing, and the Cardassians and the Klingons are now enjoying the soft beds and warm hearts of The Federation. And who better to launch the new Luna class ship Titan into the far reaches of space than Riker and Troi, the power couple of Starfleet. Except no, sorry guys you have to head back to Romulus to help facilitate power sharing talks amongst the various Romulan parties. This includes the space-Nazis Tal Shiar, Praetor Tal’Aura, Spock’s most logical reunification movement, the Remans, the military… Oh man, just so many people.

Helping out Spock with his efforts to bring the Romulan’s back into the bosom of the Vulcan Council is Star Trek Voyager’s favourite commander, Tuvok. However since he’s stuck in a Romulan jail, he’s not adding a whole lot of value to the cause.

To complicate things further, the Klingons show up and side with the Romulans. Riker has to walk a political tightrope while also making sure he and his crew don’t accidentally fall into the void of The Great Bloom.

All this while breaking in a new crew, including an exec by the name of Christine Vale who doesn’t like the idea of serving alongside the captain’s missus, and dino doctor Shenti Yisec Eres Ree. And… whoops Titan falls into The Great Bloom. Now that’s inconvenient.

Like its sister novel Death In Winter, Taking Wing mixes the post Nemesis Romulan political fallout with establishing a new status quo. The writers introduce us to a dizzying array of new characters. Some are minor characters from the TV show, such as gravity-hater Melora Pazlar who originally appeared on Deep Space 9. Other characters such as Dr Ree are completely original.

This is a lengthy book by Trek standards and it can be pretty hard to keep up with all the characters. Unless you like to keep a reference guide handy while you read, I quickly felt disoriented with the number of people I was meeting. So many of them had back stories which I couldn’t quite place to the right character at the right time. Perhaps the authors could have focused on a smaller, core set of characters in this first book, and slowly expanded the crew later. If you are like me and like to read for half an hour before bed, it might take a couple of weeks to finish a book. It’s pretty easy to lose track of all the characters and it can feel frustrating when you need to flick back and remind yourself who’s who in the zoo.

Although I didn’t love Taking Wing, I did feel it established an interesting crew and interesting characters.

However the diversity of the crew does make it quite fun to read. There are a few soap opera moments between certain characters, which lead me to believe this person and that person may end up together by book X. Some of the personal scenes do feel a bit tacked on, and there to establish certain relationships and tension rather than inform the narrative or drive the main story forward. It many ways it reads a bit like the pilot to a TV show. A TV show called Star Trek Titan I guess.

Although I didn’t love Taking Wing, I did feel it established an interesting crew and interesting characters. Dr Ree distinguished himself as a sure-to-be fan favourite, and the addition of Tuvok added a nice familiarly to an otherwise new crew. I didn’t mind the Tuvok subplot, and generally the book felt more cohesive than Death In Winter.

That being said, the TNG relaunch really does at this point feel a bit stuck in the post Nemesis world. I think the series could improve when they make a break from Shinzon this and T’Laura that, and actually go out and do some exploring. Space is the final frontier after all.

Reviews for the book vary from scathing to very positive. Theaker’s Quaterly declared that “Titan’s mission is to make sure nothing interesting happens.” Ouch. Some Kind Of Trek stated that “We get quiet a bit of world building and this is were Mr Mangels and Mr Martin excel.” While Trek Lit said in it’s generally positive review that “I [also] really love the crew of the Titan, and find the diverse species to be interesting and compelling to learn more about.” The book holds a decent Goodreads score of 3.78.

Sales for the book were good.

Taking Wing is an effective introduction to a huge cast of new characters. It was a bit confusing at times due to so many characters and so many back stories, and Romulan politics just isn’t a hugely appealing subject for me. But the book sets up what seems like an interesting TNG spinoff, and I’m looking forward to the next one.