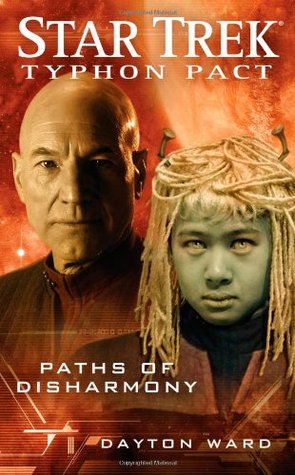 The Typhon Pact saga continues! Published in 2011, Paths of Disharmony explores the complex political machinations of Andor, a founding member of The Federation.

In many ways, Paths of Disharmony is precisely the book I imagined the relaunch titles to be; a steady, measured continuation of our beloved characters and their relationships set against a standalone story. I hadn’t expected it to be such a rare pleasure to see Jean-Luc Picard written so well, as he appears in the early chapters with his wife, Beverly Crusher and his son, Renee. I’ve read over twenty books in the post-Nemesis litverse, and only a handful of times have I been able to relax with these characters and simply enjoy that sense of continuation — such as Jean-Luc, Beverly and Renee visiting Picard’s family home.

Of course, in a Star Trek book, dramatic things have to happen. It can’t all be characters getting along and having a pleasant time. Thus, the main story soon interrupts Picard and Crusher’s shore leave.

The Andorians are having trouble having children. The Enterprise is sent to help facilitate a controversial plan to incorporate alien DNA into the Andorian genome to help them be more fertile. However, a conservative group who call themselves the Treishya aren’t cool with the idea, and they start causing trouble.

Perhaps the strongest aspect of the story was watching Picard and Crusher wrestle with the idea of raising their child aboard a starship.

It’s amazing how certain themes in this book (written in 2011) ring true today. Primarily misinformation and the mistrust of science amongst conservative-minded people. The Treishya use fear of science and fear of change to drive their agenda.

Crusher eventually joins in with the scientific endeavours, only to find the science way beyond her level of knowledge — and Crusher knows her business. It turns out the information was leaked by the Tholians, and use it to drive a wedge between Andor and the Federation. Before we know it, Andor has voted to dump the Federation altogether. Ouch.

Paths of Disharmony is a slow burn that dedicates as much time to the characters and their relationships as it does to the political machinations of Andor. Each chapter switches perspectives, and we see the story slowly taking shape through various viewpoints. I was pleasantly surprised by the OG litverse character T’Ryssa Chen (a Vulcan who eschews the Vulcan way of life) and her love interest, a traditional Vulcan named Taurik. Geordi La Forge also gets some loving, thanks to a clever setup by Crusher. 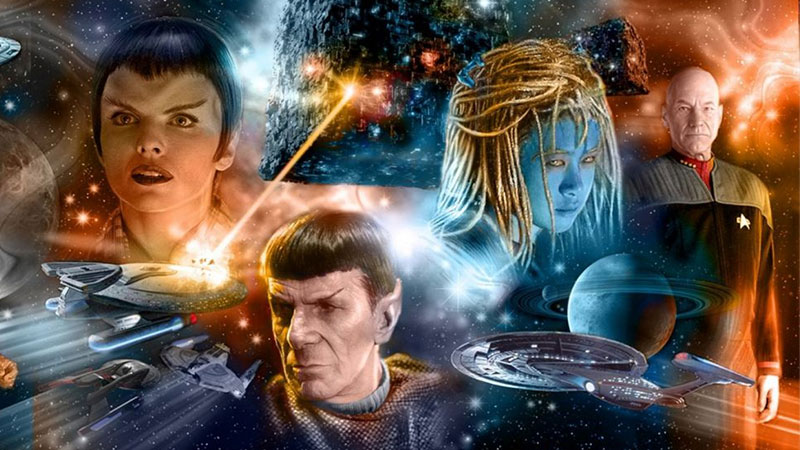 Dayton Ward has a writing style that I like to call, “taking the long way around”. By which I mean his writing tends to be a little verbose. I made the same observation of David R. George III. However, Ward’s verbosity is of a very different kind. Let me show a sample:

“The idea of raising his own child was one Picard had pondered at infrequent intervals over the course of his life. His first love had always been space and the unparalleled potential it offered for discovery and the furthering of knowledge. Even after marrying Beverly, he at first had resisted the idea of having a child with her, though his reluctance at the time was not born from common uncertainty at the prospect of fatherhood. Instead, it sprang from the fear of what might happen to such offspring in the face of the renewed Borg threat that ultimately had escalated into an invasion ravaging the Federation during the previous year.”

“Picard had pondered the idea of raising a child throughout his life. His first love had always been space; exploring, discovering and furthering knowledge. Even after marrying Beverly, he resisted having a child with her, though his reluctance was not because he feared fatherhood. Instead, he feared what might happen to his child as the Borg threat loomed. Ultimately, the Borg did invade, ravaging the Federation in the process.”

It’s not that one style is better than the other. But concise prose tends to be punchier and more powerful. Everyone tends to waffle a bit (particularly in a first draft), but I prefer a leaner style as long as it doesn’t feel rushed.

My one minor quibble with the story was towards the end when the Treishya stormed the conference and the Starfleet personnel found their weapons rendered useless. Geordi was trying to wrestle back control of the A7 computer system, and Regnis waltzes in and magically fixes the computer.

This felt like a deus ex machina — an unexpected power or event saving a seemingly hopeless situation. It would have been a lot more effective to see La Forge puzzle out the problem himself, maybe drawing on some knowledge from earlier in the story.

Perhaps the strongest aspect of the book was watching Picard and Crusher wrestle with the idea of raising their child aboard a starship. Picard has been offered the position of admiral (and even ambassador) on more than one occasion. But here, for the first time, we see Picard given a good reason to reconsider his position. In other words, the events depicted in Paths of Disharmony directly impact Picard and Crusher’s thoughts on the subject. It now seems plausible that Picard might step down as captain of the Enterprise to pursue a safer line of work. Now that would be a significant change!

Paths of Disharmony is easily the best Typhon Pact book so far. It can be a little slow at times, but the character work is excellent and kept me entertained right through to the finish.