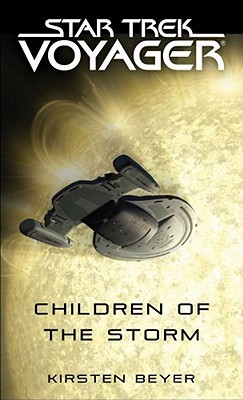 Following up from two popular and successful Voyager novels, author Kirsten Beyer is back with her third post-Destiny Voyager instalment. Children Of The Storm takes place concurrently with the previous novel, Unworthy. Can Beyer score a hat-trick with book #3?

The titular “Children of the Storm” were first mentioned in David Mack’s Destiny trilogy. I don’t remember them, but apparently, they didn’t feature as much more than a throwaway line or two. Something about them caught Ms Beyer’s eye, and thus she decided to expand the idea into a full-blown novel.

The book starts when Voyager is busy breaking bread with the Indign (see Unworthy), and so the focus is on the other Full Circle Fleet ships; Planck, Demeter, and Quirinal. They’re on the way to check out these “Children of the Storm” since they are pretty powerful and the Federation would prefer them as allies rather than, well, neutral peoples I guess.

Anyway, some folks onboard one of the ships get hungry, but the other ship has all the food. The foodie dreamboat Demeter goes to warp when it shouldn’t, and the Children aren’t too happy about it. Things really go pear-shaped when the Children destroy Planck.

In this book, we’re introduced to a lot of new characters. And I mean a lot. Quirinal’s captain, Regina Farkas, and most of her crew are pretty forgettable. However, the food/horticultural vessel Demeter’s crew are the ones that steal the show. The odd-bod Captain Liam O’Donnell prefers a quiet night in with his genetically engineered plants, while he chats with his deceased missus. Conversely, his “number 1” Atlee Fife is pretty much left in charge of running the ship.

It turns out the Children are nuts for the plants growing on Demeter, and so the crew work around the clock to keep the green things alive and growing. However, Fife grows impatient with the endless stalling and figures it would be better to cut-n-run — if only that were possible. The Children are so powerful they can hold a starship suspended in space.

Eventually, Voyager catches up with Quirinal, the latter having captured a few stray Children. They managed to figure out some communication, and Eden figures these Children have been a bit naughty so they’d best go find their mother.

Finally, the eccentric Captain O’Donnell engineers a plant that can survive on the Children’s homeworld, but Fife has decided if they’re going to go down, they’re going down swinging. A battle ensues, but Voyager manages to step in before too much damage is done.

Children Of The Storm is an ambitious work, threading together multiple timelines, multiple viewpoints, and a large cast of characters. I wish I could say it all worked beautifully, but at times the story did lack direction. Clocking in at 400 pages, it’s a lengthy novel too. I tend to prefer Star Trek books that stick mostly with the characters I already know from the small screen. Of course, a new character or two is fine as long as the focus isn’t solely on them. In this book, however, Voyager’s crew are in the background.

But there is plenty to like about the book too. As mentioned above, O’Donnell and Fife emerge as standout characters. It’s also a book that stretches your imagination; the Children exist as manifestations of pure thought, encased in polychromatic spheres. There are also many enjoyable B-plots, such as the tension between the engineers B’Elanna and Drafar.

The book also continues on the arc of Afsarah Eden searching for her homeworld, which she figures are somewhere in the Delta Quadrant. In the end, she confides in Chakotay that part of the reason she accepted this mission was to unlock the riddle of her mysterious origins. And since her husband turned out to be a member of Species 8472 (awkward!) I think just about anything is possible.

Come to think of it, Children Of The Storm is positively riddled with subplots. On top of everything else, there is the burgeoning romance between Seven of Nine and Counselor Cambridge. While I don’t mind the concept of it, I didn’t think much of Cambridge fobbing off his patients while he pored over documents concerning Afsarah’s origins. Kind of negligent, if you ask me. And the other-other subplot, involving B’Elanna and the mysterious cache of Starfleet one-man fighter jets fell a bit flat.

Ms Beyer’s strength, I think, is really in her ability to get inside the characters heads, and make them overcome personal struggles. We care when they care. Children Of The Storm has plenty of nice character moments but the overall plot was a bit muddled.

Neelix also makes a brief return, which I enjoyed, although I can’t work out if he will eventually rejoin the crew, as it’s obvious Ms Beyer isn’t into easy-win fan service. After all, we are now three books in and there is still no sign of Captain Janeway! I’d love to see them both rejoin the crew in the next instalment (and since Janeway is on the cover of the next book, I guess 1 / 2 of my wishes might come true).

Speaking of old cast rejoining the crew… maybe Kes? Yes, you heard me. Kes! I always liked the character, and a part of me is still hanging out for her return. Although of course, she should be brown-bread by now…

A few quibbles aside, Star Trek: Voyager: Children Of The Storm is a fine book. In many ways Beyer is a victim of her success; having set the bar so high with her previous novels, the pressure was on to do it again. Perhaps the storyline was a bit too ambitious, and I didn’t find all the new characters appealing — although O’Donnell and Fife were great. Online reviews suggest the book was well-received, with many praising Beyer’s multi-book story arcs and elevation of Voyager’s sometimes droll characters.

My final verdict: Not quite as good as Full Circle or Unworthy — but still pretty good.