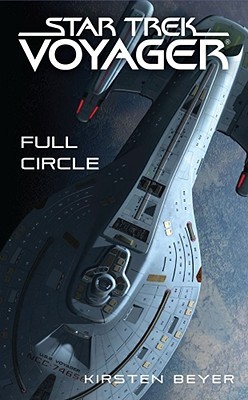 When Kirsten Beyer picked up the heavy gauntlet of the Voyager relaunch titles, she sure faced a challenge. Apart from tying up the loose ends from the preceding novels, she also had to: 1) Deal with “the Janeway thing” from Before Dishonor 2) Launch the Full Circle Fleet storyline 3) Work it all in with the aftermath of Star Trek: Destiny

Once more unto the Delta Quadrant, dear friends…

Voyager (the show) remains a sentimental favourite for me. But the relaunch novels didn’t quite know what to do with the intrepid crew once they were back on terra firma. So when I read that Beyer’s books would send them back to the Delta Quadrant, I thought it was a clever idea, bordering on genius. It was the thing that defined Voyager from other Trek iterations, and it just made sense to re-explore the region. It was a clever twist.

Full Circle’s first half is mainly spent tying up the Miral/Kuvah’magh story, which I always found a bit blah. But Beyer cleverly ties this story thread in with the Full Circle Fleet, as B’Elanna plans to end the game of hide-and-seek she’s playing with the warriors of Gre’thor by finding the best hidey-hole in the galaxy — which happens to cross paths with Voyager’s new course.

It’s in the second half that the book really gets its warp engines revving. Admiral Batiste cooks up the crazy plan to send Voyager back to the very place they found themselves oh so lost in, but Janeway says something akin to: Over my dead body. Well… since part 2 fast-forwards to post-Destiny, poor old Janeway has danced off into the darkness with Lady Q.

It's in the second half that the book really gets its warp engines revving.

As the story progressed, I thought we would see Janeway beamed down in a ray of Q-infused light — she’d scoop up Seven and Chakotay and bam — Admiral Janeway commands the fleet while Captain Chakotay sits in Voyager’s big chair. By the time the last few chapters came about, the state of play became obvious, with O.G. characters Batiste in command of the fleet and Eden as the captain of Voyager. Personally, I would have ended the novel with Chakotay and Janeway in those spots. Still, since I haven’t read any of the preceding novels since A Farther Shore, in the context of the other books it might have been too rushed to bring them back so soon.

Then there is the quality of Beyer’s prose. At first, I struggled with it. I’ve criticised seasoned Trek writer Christopher L Bennet for telling/explaining too much to the reader. Well, Beyer is just about the telliest, explainiest writer I’ve come across. The number of times she literally tells the reader how a character feels is astounding. She breaks the most basic rules of “good writing” again and again.

However, her writing does carry a certain weight and punch. Once I shut down my analytical brain and just read the book, I found myself reading chapter after chapter until well past my bedtime. Not since the Destiny trilogy did I find myself so compelled to keep flipping the pages.

Let’s read a short excerpt from the book:

“Tuvok felt no fear as she said this. He did, however, realize that if he did not find a way to defend himself against her assault, he would probably not last the afternoon, let alone as long as she intended.”

Beyer has forced me to rethink my idea of good prose. While the above may not win any literary prizes, it’s the kind of writing that fails the intellectual “is it good” test but passes the “is it fun to read” test. Which, I suppose, is the most important test. But what if I rewrote it, to be more punchy and descriptive?

Tuvok stood straight and lifted his chin. As he looked about the room, he noted only soft furnishing and curious knick-knacks; nothing that could heft some weight should push come to shove. A sly grin curled her lips.

What do you think? Which one is better?

Perhaps the main reason Beyer succeeds is that when she does show, she shows us well-constructed scenes that give the characters internal conflicts to work through. The flashbacks in which Chakotay (normally a pleasant, but boring character) struggles with Janeway’s death are a wonderful example of character-driven scenes with real emotional weight. She pushes Chakotay to the edge and even lets him fall, at least just a little.

Another criticism I’ve had of other Trek novels is they often spend too much time with original characters who, interesting as they may be, aren’t the reason many of us pick up a Trek book. Libby, for example, was a character I liked, but she took over A Farther Shore — and it was annoying spending so much time with her and not her love interest Harry Kim! In Full Circle, however, Eden and Batiste are important to the story but we still spend plenty of time with Tom, B’Elanna, Chakotay and Seven.

Kirsten Beyer really hit a home run with Full Circle. She managed to work Voyager into the post-Nemesis, post-Destiny timeline with grace and style. It was one of the few Trek books that really kept me wanting more and I can’t wait to read the follow-up Unworthy. Yes, her prose is sometimes a little amateurish, but she also proves you don’t need beautiful writing to create an effective and engaging story.