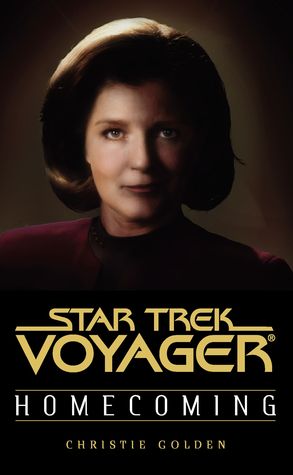 After seven long years stranded in the Delta Quadrant, Janeway brought her crew back to the little blue planet she, and so many of her crew, called home. And cut. Draw the curtains and clean the stage. Voyager is home. Of course, all good Trek geeks turn to the books to continue the events once the show ends. Thus, Voyager’s relaunch is here, and veteran author Christie Golden is in charge.

Star Trek: The Next Generation’s first relaunch title, Death In Winter, got the post-TV/movie era off to a shaky start for Picard and his crew. I hoped that the two-parter Homecoming and The Farther Shore would see Voyager’s relaunch land on steadier ground.

After all, the series left behind a showbag jam-packed with loose ends that the books could build on. For example, after four seasons with nary a sultry look in Chakotay’s direction, Seven suddenly finds herself in love with Chakotay in the season finale. Homecoming had an obvious manifesto to quickly reverse that decision. There were plenty more loose ends: How will the people of Earth treat the Doctor? Will Tom Paris find peace with his father? Will the Marquee crew members face trial? I could go on…

The most common criticism of Homecoming is that it views these loose ends as a bothersome obstacle, rather than an opportunity to organically grow some interesting storylines. Golden gets out her dustpan and brush and sweeps them up. No muss, no fuss.

I really feel for Golden. The challenge with Star Trek books is that something needs to happen other than a bunch of the crew having lunch dates with their long-lost loved ones. Without some action, how do you explore the loose ends in a way that is dramatically satisfying? In saying that, I thought the story of a Borg virus was actually pretty clever. Infect, rather than assimilate. 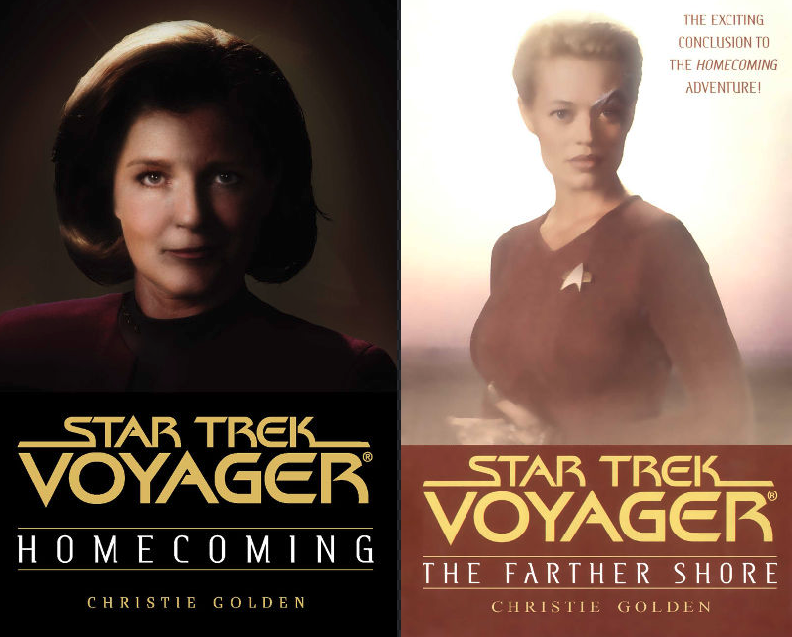 Reading the first half of Homecoming, I found that I quite enjoyed seeing each character get their brief moment in the sun. Harry reuniting with his parents (and Libby), for example, was a nice moment. But then, two-thirds in, the book has wrapped all that up and suddenly the Borg virus is everywhere.

Of the three parts of the story that continue through to The Farther Shore, the one I particularly disliked was the holostrike. I can see how it could have sounded cool in theory. But in practice? If all “sentient holograms” go on strike, that essentially means the Federation has enslaved millions, perhaps billions, of sentient beings. And if they aren’t sentient, then it’s impossible to have any sympathy for them. And holographic restaurant furniture? Does that mean the holographic seat that cushioned Janeway’s butt in the restaurant scene was secretly dreaming of another life as a kitchen countertop?

The other-other plot, involving B’Elanna, was reasonably well written but ultimately felt like a pointless diversion. It had no impact on the main story and obviously existed purely to set up future storylines.

Golden has an interesting writing style that, for lack of a better word, one might describe as old-fashioned. It’s a pleasant writing style. It is neither verbose nor brief, neither lyrical nor lean-and-clean. However, by the second book, there was a lot of telling/explaining. Each chapter was like; Here’s Libby. Libby is thinking about a bunch of stuff. Libby calls someone. Oh no, Libby feels worried.

Homecoming was not the disaster it was rumoured to be

Something that annoys me as a reader is when an author keeps a piece of information away from me to build suspense. Golden does this when B’Elanna reads the letter from her mother, but the reader does not get the see the contents of that letter. Instead, B’Elanna folds it up, puts it in her pocket, and is like; “See ya Tom and my newborn child, I’m off to probably die in some Klingon ritual even though I totally eschew Klingon culture. Bye.” As a reader, I am supposed to gasp and feverishly turn the pages until I discover the contents of the letter. In reality, I roll my eyes and put the book back on the nightstand.

Despite my criticisms, I found Homecoming was not the disaster it was rumoured to be. It was a pleasant way to reunite with the Voyager crew, and even though everything wrapped up a bit too neatly, I mostly enjoyed it. Unfortunately, the convoluted holostrike story, too much focus on non-Voyager characters, a pointless-feeling side quest for B’Elanna, and some lazy writing meant that The Farther Shore was a lot less enjoyable. I mainly wanted to read these two books to set myself up to read the later books, starting with Voyager: Full Circle.

TrekBBS readers rated Homecoming as “Below Average” and The Farther Shore as “Average”.