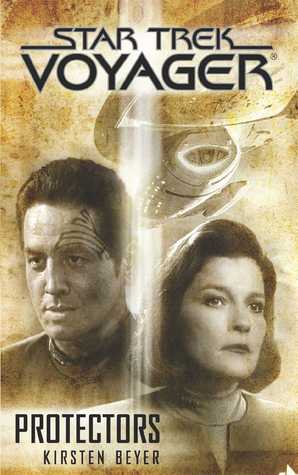 Kirsten Beyer is back with yet another Star Trek: Voyager novel. Protectors finds Admiral Janeway sent back to Earth for psych evaluations, while Chakotay and crew head out to re-investigate the spatial anomaly from the second season episode Twisted, in which Voyager encountered an anomaly which twists and distorts the ship’s internal layout.

Believe it or not, the aforementioned Twisted is actually one of my favourite Voyager episodes. And yes, I realise I am in the minority on this one. Twisted, for me, exemplifies the goofy charm of the early Voyager episodes. Maybe it’s just the nostalgia speaking, but I love that episode.

So I was curious and excited for the crew to revisit the source of the mysterious life form — as Harry finally decoded all that info it dumped into Voyager’s main computer. They head out that way, only to find a region of space that appears to be cloaked. What seems like a dead end turns out to be a hidden planet filled with pre-warp life in desperate need of help.

As it turns out, the life form from Twisted is a kind of semi-sentient, programmable thing that was created by another race. That race ruthlessly mined the local planets for their resources, killing whoever happened to be living there in the process. But in a last minute act of defiance, these proctors (as they are now called in the book) attempt to assuage their guilty consciences by transporting some of the surviving, living beings onto an ark planet.

Although it was an interesting story in and of itself, it didn't really feel connected to the episode that inspired it

I have to admit… I felt a little let down. Although it was an interesting story in and of itself, it didn’t really feel connected to the episode that inspired it. In fact, it felt as though Beyer had a cool idea for a story, and retrospectively shoehorned in the Twisted connection.

Following on from the previous novel, I expected Admiral Janeway to be in charge of the fleet at this point. However, she is called back to Earth to seek counselling and deal with some tricky politics. Ok, sure — she was assimilated by the Borg, and then she was dead, and then the moment breath returned to her recombobulated body, she saw hundreds die and the world nearly end. So fair enough, maybe she needed a minute to catch her breath before being given command.

I get that Kirsten Beyer never gives us an easy win. After all this waiting, we still don’t get to see Janeway in command. Instead, she reconnects with her mother and discovers the joys of gardening. Yes, really. In truth, I still enjoyed many of the Janeway scenes (the Picard cameo was fun) — but the whole thing did feel a bit transitionary. Almost like Protectors is a book between books, designed to tie two bigger story arcs together.

Anyway, it’s not that Protectors was bad — far from it. Despite the slow plot, it was still a lot of fun to revisit an old TV storyline, and the set up for the new civilisation known as the The Confederacy is an intriguing one. The general alien-of-the-week style was well executed, and it all felt very Trekky. Which is a good thing!

However, some aspects of the story I didn’t totally gel with. The bit where Tom Paris’ mother petitions for custody of his kid — that did feel a bit Days Of Our Lives. And although I liked the return of Seven’s former love interest Axum, the whole pseudo-love-triangle with Seven, Axum and Cambridge also felt a little soap opera-esque.

Protectors, while not being Beyers strongest novel, was still an enjoyable read. I had a strong storyline, and Beyer’s writing style has matured into a fluid and highly readable form of prose. Perhaps some of the b-plots fell a bit flat, but overall it was another fun adventure with this new look Voyager crew.