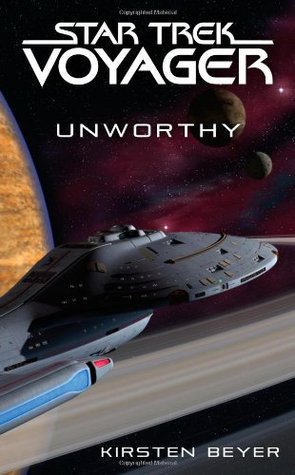 There is something to be said for getting back to the status quo. Namely, putting the Voyager crew back into their original seats… more or less. With Full Circle, author Kirsten Beyer sent the U.S.S. Starship Voyager hurtling back to the Delta Quadrant, thanks to some mean and lean slipstream technology. But the crew were still fractured, physically and emotionally — what will it take to bring Starfleet’s finest back to the adventure?

Kirsten Beyer won a lot of hearts and minds with her previous Voyager novel, Full Circle. It reigned in the chaos of the previous books and began putting the pieces of the playset back into their rightful configuration. But she didn’t rush it. I honestly thought by the end of Full Circle, we’d have seen B’Elanna, Tom, Chakotay, Seven — and even Admiral Janeway — back manning the consoles of Voyager’s bridge.

It became apparent that Beyer isn’t one to rush things. For the most part, this is probably good, as rushing things would only feel predictable and unearned. Instead, Unworthy marches to the beat of its own Ressikan flute, er, so to speak. B’Elanna finally manages to shake off her chasers and even catches up with our favourite Talaxian chef, Neelix. Tom is forgiven by Eden for his deception, and Chakotay sneaks his way on board to help out poor Seven — who forgot to write her name on her underwear, so the Caelian Gestalt implanted a voice in her head to help her remember that her name is Annika Hansen.

Let’s talk about the new characters. Eden and Batiste strike me as being Janeway and Chakotay in reverse. Eden is dark-skinned, even-tempered and of a lower rank. Batiste is impulsive, adventurous and commands the fleet with zeal. Okay, it’s not a perfect comparison, but I do wonder if this is how the characters formed in Beyer’s imagination.

The new counsellor, Hugh Cambridge, is an interesting character — but I can never quite buy into his abrasive style. It feels a bit forced at times. The other newer characters include Nancy Conlon, who buddies up with B’Elanna in engineering, Aytar Gwyn, whose hair is blue and don’t you forget it, Doctor Sharak, who is just kind of there, and Kenth Lasren who is also, well, there. And of course, the TNG favourite Reg Barclay is a welcome addition to the cast — and Beyer writes him superbly.

One nice aspect of Voyager’s TV run was watching Naomi Wildman grow up. I always wished we’d seen a little more of the relationship between Naomi, her mother, and Neelix. Now we have Miral (Tom and B’Elanna’s daughter), who might give us that same sense of continuity. I giggled every time she’d say “p’tak!” (a Klingon slur) amongst otherwise polite company.

Speaking of Neelix, we only get to see him briefly when he helps out B’Elanna. However, I have a feeling he’s going to show up in the next book. But Captain Janeway is barely even mentioned. I know she’s coming back, but just when and how I don’t know. Perhaps it will coincide with Eden finding her home planet out there in the deep dark depths of the Delta Quadrant.

The actual story itself is a little more monster-of-the-week, in which we meet in the Indign. They’re a Borg worshipping co-op, who occasionally scoop up a room full of dead people and offer them to their favourite cybernetically enhanced galaxy-conquering collective. At first, I groaned: Oh no, it’s a Borg story! It’s not that I dislike the Borg, it’s just that I’ve had my fill of them. Thankfully, the story keeps the Borg on the periphery.

Beyer’s writing is still equal parts wonderful and infuriating. She explains every feeling a character has and lets adverbs fly wildly around bloated sentences. But, once the final chapter closes, I can’t deny she takes the reader on a mighty fun ride. Reading this book, I found myself analysing the writing less and getting into the groove of the story more.

I have two minor quibbles with the plot. Firstly, the Seven of Nine aspect felt half-baked. I thought the voice in her head would have a real, concrete impact on the story. However, by the end, it fizzles out when she confronts it. And her Caeliar catoms don’t amount to much either.

Secondly, the “Megan” subplot felt a bit tacked on. Apparently, Reg and Doctor Z cooked up a perfect holographic housewife for the Doctor, but the Doctor believes her to be a regular eating/sleeping/breathing/peeing human. But right when things are starting to go bow-wow-chikka-bow-wow, she’s possessed by one of the Children Of The Storm. Queue the sequel novel.

That being said, the above are pretty nitpicky points, and neither did much to tarnish my enjoyment of the novel.

One aspect I did enjoy was the revisit into our galaxy from species 8472, particularly the scene in which Chakotay transports onto the bridge and has friendly chitchat with his old 8472 flame. Beyer really excels at constructing these sorts of scenes, which are both a fun callback to the show and an entertaining way to move the story forward.

Overall, Unworthy was a very worthy sequel to the equally excellent Full Circle. I’ll be rounding out this mini-run of Voyager novels by reading Children Of The Storm next, before returning to the Titan series with James Swallow’s Synthesis.