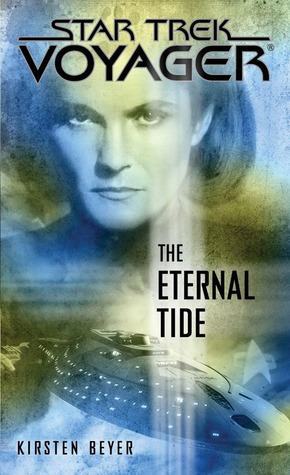 Janeway is back! No, that isn’t a spoiler — because she is on the front cover. The Eternal Tide continues Kirsten Beyer’s series of Voyager novels, which continue the story after the TV show’s finale.

First things first, this is one helluva Star Trek book. Kirsten Beyer takes the extra time and puts in a little extra thought — perhaps even love — into each Voyager book she writes. The Eternal Tide is no exception.

Let’s face it, Beyer was given a dud hand when she was handed the keys to the Voyager relaunch books. The biggest issue is that Janeway died (rather unceremoniously) back in 2007’s Before Dishonor. Of course, Janeway would have to return at some point. But I wondered how Beyer could do it without it feeling like cheap fan service.

I think the answer is that Beyer understands that for every gift, there is also a price to be paid. This sense of cosmic balance rings true throughout The Eternal Tide. Another writer might have simply had Q snap his fingers, and poof, Janeway is back. But in this book, we discover that the split second after her death, Janeway is “trapped” in the Q Continuum because Q junior knows that there is something nasty on the horizon, and he thinks Janeway might be able to help.

You see, Janeway (and Voyager) did something on their original trip home (the timeline that took 23 years before Admiral Janeway returned in the finale), which would have prevented the Omega Continuum from encroaching on our side of the trans-dimensional fence. Janeway chooses to recomobulate her ravaged body and order to help, and genuinely right the wrong her other self (Admiral Janeway) made.

Confused yet? Well, it’s a bit hard to summarise, but it makes sense if you read the book.

The point is that a sacrifice must be made. Janeway doesn’t get a free pass back into the land of the living. With a bit of help from Kes (Yes! Kes is in it — thanks, Kirsten), Janeway returns. As you can imagine, Chakotay is pretty happy to see her — once the terrible shock and horror of her sudden return has worn off, of course

The price to be paid is terrible. Q Junior, Amanda Rogers, Asfarah Eden, and a good part of the fleet sacrifice their lives to stop the Omega Continuum from resetting the timeline and wiping out all life as we know it. The story of Asfarah Eden’s origins is satisfying, as we learn that she is a child of Omega and must return there by the book’s end.

I think I have finally made my peace with Beyer’s writing style. Her writing has certainly matured. But also, I’ve learned to read her books with a less analytical eye and simply go along for the ride. Yes, she still spells out every characters’ thoughts and feelings to the nth degree. And yes, her writing lacks subtlety. But she understands the characters and uses them to drive the story forward. And she never, ever takes the easy way out.

My only slight issue with the book was that the carnage and destruction were too high. A lot of people died in this one. I thought for sure that the ships caught in the Omega Continuum would somehow find their way out by the end. Alas, they did not. Apparently, Beyer was pushed into having a bigger body count by her publisher, who wanted an “explosive” story. But after The Destiny Trilogy and all that, I think smaller stories with a bit less at stake are most welcome.

The Eternal Tide represents a turning point for Beyer as she details the Full Circle fleet’s journey back through the alpha quadrant. This was one of the few Trek books I truly wanted to keep reading until late in the night, and I felt genuinely excited to pick the book back up again the next day.